Thank you for your correspondence concerning Iceland's policy on whaling. I wish to assure you that Iceland has no intention of catching any of the endangered species of whales, killed on a large scale by other whaling nations in the past. Iceland's resumption of sustainable whaling only involves abundant stocks and is linked to Iceland's overall policy of sustainable utilisation of marine resources. Iceland fully appreciates the need for careful conservation of marine resources. Our economy depends on those resources as marine products constitute around 60% of Iceland's revenue from exported goods and almost 40% of all Icelandic exported goods and services. Disruption of the ecological balance in Icelandic waters due to overfishing or other reasons could have catastrophic consequences for the livelihood of Icelanders. ... Iceland has taken great care in maintaining balanced and sustainable fishing in Icelandic waters by enforcing an effective management system for various fish species including cod, herring and capelin... For a number of years, Iceland has acknowledged the need for scientific research on whales to gain a better understanding of the interaction between the different whale stocks and other marine species and the role of whales in the marine ecosystem. Therefore, Iceland began implementing a research plan on minke whales in 2003... ...many whale populations are far from being threatened or endangered. The total stock size of Central North-Atlantic minke whales, for example, is close to 70,000 animals. Of those, around 43,600 live in Icelandic coastal waters. Fin whales in the Central North Atlantic number around 25,800 animals... Iceland's decision to resume sustainable whaling involves takes of 30 minke whales and nine fin whales, during the current fishing year which ends on 31 August 2007 A responsible management system will ensure that the catch quotas set will not be exceeded. The catches are clearly sustainable and therefore consistent with the principle of sustainable development. ... Therefore, Iceland is no longer bound by the so-called moratorium on commercial whaling. In this respect, Iceland is in the same position as other IWC members that are not bound by the moratorium... I hope that this information will be useful to you in understanding Iceland's position on sustainable whaling. Sincerely yours, Helgi Ágústsson Ambassdor of Iceland
No comments: 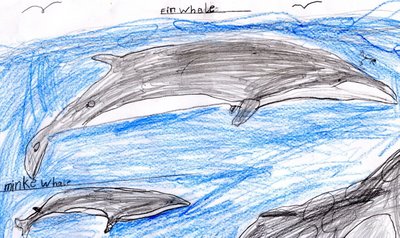 By the way, the picture of the Minke and Fin whales was drawn by my 6 year old son Dáire.
8 comments: