What Did the Irish Ever Do for Chile?

As stated in my previous article on the 'An Irishman's Guide to the History of the World- 'The Americas' , brave freedom-loving Irish played an influential role in the liberation movements of at least nine American countries as they helped defeat nasty Spanish, English and other European imperialists.

No Irish contribution in Latin America is more notable than in Chile where Bernardo O’Higgins, the illegitimate son of an Irishman, became the first president of the country when it was declared an independent republic in February 1818.
Chilean towns, roads and ships are named after those Irishmen who contributed to Chilean’s struggle for nationhood.

2010 - Joint Chilean & Irish Stamps Honour Irish Heroes of the Chilean War of Liberation
In October, 2010, Ireland and Chile issued stamps to commemorate the bicentenary of the beginning of the struggle for Chilean Independence. The stamps honour two men with Irish backgrounds who played a crucial role in the quest for Chile’s liberation - Bernardo O’Higgins and John (Juan) MacKenna. 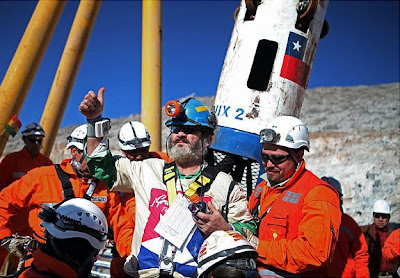 Irish Drill Used To Rescue Trapped Miners
Coincidentally in the same month(oct), proof that the benign influence of Ireland towards this Latin Amerian country still exists was shown by the fact that the drill head used to miraculously rescue the 33 trapped miners in the Atacama desert in October 2010 was made by an Irish engineering company (Mincon) based at Shannon in Co. Clare. 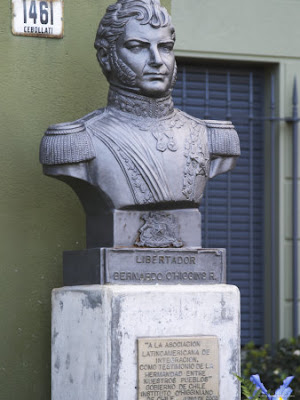 Bernardo O’Higgins: Liberator & Democrat
Bernardo’s most famous victory was at the Battle of El Roble in 1813 when he heroically led a cavalry charge that routed superior Imperial forces. His rousing speech to his troops before the attack has become legendary. Shouting “Lads! Live with Honour or Die with Glory! The one who is brave is the one who follows me!” Riding by his side that day was another Irishman John (Don Juan) MacKenna from Monaghan who was Commander in Chief of Artillery & Engineers in the revolutionary army & later commander of Santiago.
Spain soon sent further reinforcements to the country, inflicting a series of defeats on the rebel army forcing the remnants to take sanctuary in Argentina. O’Higgins returned in 1817 with an invasion force jointly commanded with Argentinean hero José de San Martin which overthrew the Spanish within the year . 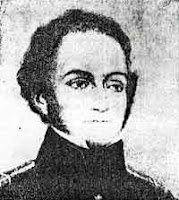 San Martin's Irish Officers
The rebel leader José San Martin had many Irish aide-de-camp in his service, including Thomond O’Brien from Wicklow who served by his side in all his major wars across South America including in the Chilean campaign.

Irish Origins of Chilean Navy
That other great liberationist, Simon Bolivar, also participated in the Chilean independence struggle and was brought to that country in the ship Chimbarazo commanded by another Irishman, Charles Wright from Drogheda in Co. Louth, who himself achieved legendary status for his naval exploits and later founded the Ecuadorian navy.

Bernardo O’Higgins had the foresight to establish a Chilean navy recognising that, without it, victories on land would be meaningless if the surrounding seas were controlled by the enemy. In his own words "This victory and a hundred more will be insignificant if we do not dominate the sea."
He commissioned an ex-British navy officer George O’Brien from Ireland to establish a navy.
The first ship the patriots secured was a royalist ship Aguila taken in Valparaíso by a boarding party led by Raymond Morris, an Irish officer of San Martín's army who had served in the British Navy. He was appointed her captain. With a contingent of 25 soldiers (Chile's first marine corp), Morris sailed to Juan Fernández where the crew daringly rescued rebel prisoners held in the town. 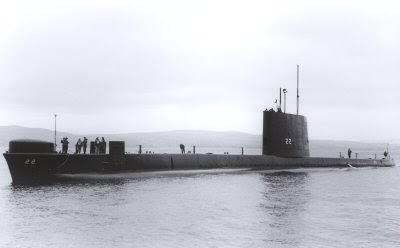 O'Brien was the first Chilean naval officer killed in action when he led a boarding party from the Lautaro against the Spanish frigate Esmeralda that was blockading Valparaíso.
The Chilean navy still commissions ships in his honour. 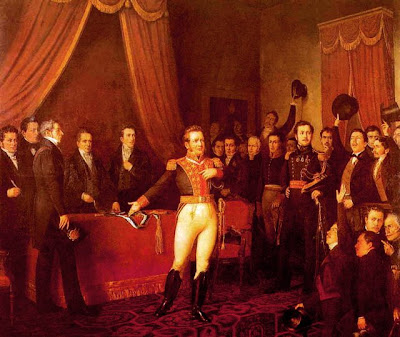 O'Higgins - Too Radical for Conservative Nobility
Unlike some of his fellow more conservative isolationist landowning Chilean revolutionaries, O’Higgins possessed strong liberal democratic ideals and fought for the liberation of all South America from colonial rule. He abolished titles of nobility and expelled Santiago’s royalist archbishop. Such radical reforms alienated him from the aristocratic elite who forced his abdication and exile from Chile in 1823. 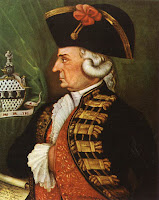 Bernardo’s father Ambrosio (Ambrose) O'Higgins was the most powerful representative of Spanish Imperial rule on the continent, being Viceroy of Peru and governor of Chile. He was born in Sligo 1720, the son of a tenant farmer. Like many Irish in an Ireland experiencing a brutal British colonial occupation where Irish Catholics were treated as an inferior subjugated peoples and denied basic human rights, Ambrose was sent as a young man to Spain where educational and career opportunities existed for Irish Catholics.

Established First Transcontinental Postal Service
In 1756 he emigrated to South America, initially working as a trader before taking an engineering position with the Spanish Imperial Service. Ambrosio made a deep impression on the continent establishing its first reliable postal service, that linked once isolated Chilean colonies with the city of Buenos Aires via a chain of weatherproof shelters built across the inhospitable terrains of the Andes mountains. 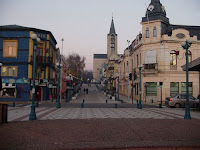 His big breakthrough came when the military governor of Valdivia in Chile, another Irishman John Garland, convinced him to be his assistant. In the late 1780s, Ambrosio was named Governor General of Chile and began a remarkable social and economic transformation of what was formerly a backwater colony by building roads (including between Santiago and Valparisso) and cities most notably San Ambrosio de Ballenary. Ballenary was an aristocratic title bestowed on him by a gracious Spanish king, probably in recognition of his birthplace of ‘Ballinary’ in Co/ Sligo Ireland.

Ambrosio was an enlightened ruler, establishing roads, towns, libraries and markets and abolished the repressive encomienda feudal system whereby native lands and peoples were granted to Spanish colonists to do with as they wished.

MacKenna: Rebel Commander-in-Chief
John MacKenna, from Monaghan, was a close friend of both Ambrosio and Bernardo and was a key figure in Chile’s struggle for freedom, becoming Commandant General of the rebel army and credited most notably with an important victory over superior Imperial forces at Membrillo.
Similar to O’Higgins senior, he left Ireland for Spain before serving in the Spanish military. Ambrosio made him governor of Osorno in southern Chile, where he used his engineering skills to rebuild the ruined city.
After a coup d'etat by a faction led by José Carrera in 1814, he went into exile to Argentina with O’Higgins and was killed there soon after by José’s brother in a duel in Buenos Aires

Born in 1824, Rear Admiral Patricio Javier de los Dolores Lynch was a Chilean naval hero who played a leading role in Chile's war against Peru in 1880-1881. He was appointed Supreme Military and Political Commandant of Peru during the occupation period and is often referred to at the "Last Viceroy of Peru". He was though denounced for his harsh rule and was condemned by many leading liberal politicians of the time including the prominent Chilean-Irish writer Benjamin MacKenna.
Since his death, the Chilean navy has always had a ship 'Almirante Lynch' in service.

Lynch: Galway to Chile via Argentina
Lynch was the son of Estanislao Lynch y Roo who had served with San Martin's Army of the Andes. He was originally from Argentina and was the son of Patrick Lynch from Galway who came to Buenos Aires in the 1740s.
Another descendant of Patrick was Che Guevara, the Argentinean-born hero of the Cuban Revolution. Che's father was Ernesto Guevara Lynch. 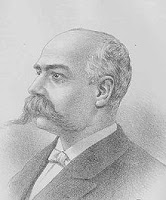 One of Chilean's most well known writers, journalists and historians is Benjamín Mackenna, grandson of General Juan (John) MacKenna, hero of the Chilean War of Independence. During his lifetime he also served as mayor of Santiago and Chilean ambassador to the United States.
Benjamin lived in exile for many years after participating in the failed liberal revolution of 1851. Captured and imprisoned, he escaped disguised as a woman (shades of Eamon De Valera in his exit from an English prison in 1919!). Whilst abroad, he visited his ancestral homeland of Ireland.

Irish Sanctuary for Chileans Fleeing Pinochet Persecution
In a country where the Irish legacy has been one of liberation, freedom, justice, democracy and egalitarianism, it is only natural that refugees from Chile fleeing the Pinoche's military junta in the 1970s were granted asylum status in Ireland. Though their numbers were small, nevertheless their influence was noticeable in the contemporary student union movement, in left wing politics and amongst liberation theologians in the Irish Catholic Church 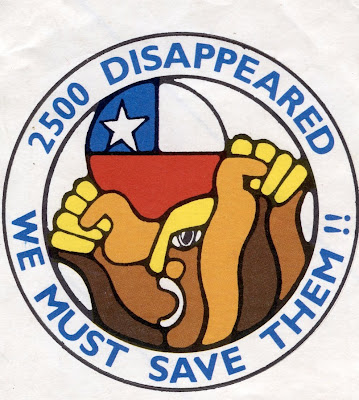