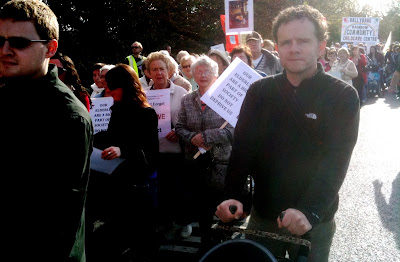 At last, those working with communities are starting to unite and fight back against proposed government cuts that will devastate neighbourhoods and led to ghettoisation and a social meltdown that will undermine all the good work done over the last decade by organisations such as Galway City Partnership.
Why should the innocents particularly the disadvantaged be forced to suffer and to pay for the sins of the coterie of selfish 'me fein' property speculators, bankers, planners, top civil servants and certain politicians that got us into the recession that Ireland is now facing?
Galway city recently saw a fantastic colourful crowd of over 1,000 community activists of all ages protest against the threatened state cuts to the community sector. It will be the first of many such rallies over the coming months.
See my previous article entitled Economic Meltdown Could lead to Social Meltdown