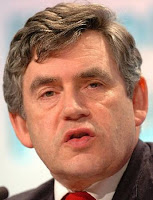 I really hope that the British Labour Party is given a trouncing at the general elections. They long ago betrayed so many of their fundamental principles & are now the embodiment of the saying that "power corrupts".
Brown/Blair presided over a corrupt Parliament where many Labour MPs became paid lobbyists for vested interests, fiddled their expenses, refused to scrap the outdated Trident nuclear submarines missile service costing the taxpayers billions of euro, backed an illegal colonial war that killed hundreds of thousands of innocents. Britain has huge debts, manufacturing has all but disappeared & endemic poverty has only increased. Endemic employment has worsened. Brown's two-face approach to Gillian Duffy in Rochdale portrayed his arrogance & contempt for the public, particularly core Labour supporters. She made clear that she was a veteran Labour supporter & asked him perfectly reasonable questions about the economy, jobs & emigration. He smilingly praised her for her community ethos & but was caught angrily demeaning her off camera. Brown is an arch-hypocrite. Then he brings in war criminal Tony Blair to shore up his campaign. The sun-tanned Blair is supposed to be EU & International Peace Envoy to the Middle East. Is he ever there? He has done nothing constructive that helps the downtrodden Palestinian people. He seems to spend his time on the lucrative US lecture tour circuit or undertaking paid consultancy work across Asia. I am writing to the Irish Foreign Minister asking for his sacking.

I am glad to see that you are certainly not falling victim to apathy :-D

Thanks Brian! Radicals like me grow old but no wiser!