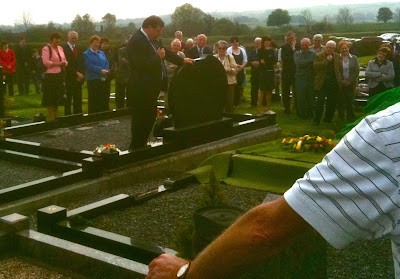 A few days, my father's oldest brother sadly passed away.
Ar dheis Dé go raibh a anam.
Michael Smith was a true gentleman, full of wit and charm, loved by his community, neighbours, friends and family. He was a great Gaelic footballer in his youth, a man that was throughout his long life a great traditional musician, a well known stalwart of Comhaltas na Ceoilteorí Éireann, a lover of the Irish language and a great community volunteer in his home village of Cloghan in county Offaly.
I was deeply moved when a lone accordionist played a medley of Irish tunes at the graveside.
Uncle Michael was brought up on a small farm with none of the trappings of wealth. My grandfather Patrick was a farm labourer that had to hire himself out as a ploughman, drover and thatcher to put food on the table. A great all-rounder. But poor like many of his generation.
As with all of his brothers and sisters, Michael worked hard to break out of the poverty trap. As a youngster he spent summers digging turf on of the family holding in what was then the vast Bog of Allen. He found employment at Ireland's first milled-peat fired power station at nearby Ferbane when it was opened by the Electricity Supply Board (ESB) in 1957. It used the turf from the local bogs. He worked himself up to become a senior manager and stayed with the organisation until his retirement.
My grandfather was a great IRA man who fought in the War of Independence. He was captured in a shoot-out during an ambush of a British army unit and spent 2 years in a military prison, securing his freedom only after the ceasefire and the ending of the war. Like the rest of his family, he fought on the losing Republican side during the Civil War.
Like many republicans of that era, the Smiths went with DeValera when he left Sinn Féin and established Fianna Fáil as he continued a campaign for a better more egalitarian more just society that what appeared in the form of the Irish Free State. Uncle Michael followed the family tradition and believed wholeheartedly in the early traditional radical values of the party, that was then the main party of the rural and urban working classes.
He became an important organiser of Fianna Fáil in Offaly over the years and helped out Brian Cowen from when he started out on his long political career. Michael stayed a party loyalist to the end of his days.
Hence it was no surprise when our former Taoiseach gave a deeply moving oration.
My mother's family also came from the same nationalist, republican small farming tradition that went with DeValera in the 1920s.
Yet to be honest, I had to hold back my anger at the funeral, and not say anything that would disrupt the sorrowful occasion and upset the mourners. For I, like the majority of people in this country, am livid at the way Fianna Fail has brought ruination to the country in order to bail out banker friends and property speculators who epitomized greed and arrogance. It seemed for Cowen and co that favours to rich friends mattered more than duty to the citizens of Ireland.
So I was genuinely shocked during the funeral at seeing how many people clapped and chatted with Cowen as if he was some great hero.
I stayed away from the man. But I was in the minority.
For ever since my youth I have been highly critical of a party that betrayed many of its radical founding principles especially with the setting up of 'Taca' by Charles Haughey which soon led to Fianna Fáil becoming hijacked and corrupted by a parasitical elite of 'nouveau riche' property developers, absentee landlords, land-grabbers and carpetbaggers who saw the party as a way of using political connections to secure lucrative government contracts and land re-zonings. There was no real sustainable national wealth created by these men.
There were and are honourable people in the organization such as Eamon O'Cuiv and Noel Treacy. But not enough.
I am proud to say though that most of my brothers and my sister concur (I think!) with my political beliefs and saved me from being viewed by the older family members as the lone radical black sheep. But even most of these cousins have changed their perceptions as the reality of the causes of our recession have been exposed and the betrayal by Fianna Fáil to all those of previous generations who suffered death, imprisonment and torture so that future generations could live in a self-governing democratic society free from the evils of enforced emigration, privilege, absentee landlordism and poverty.