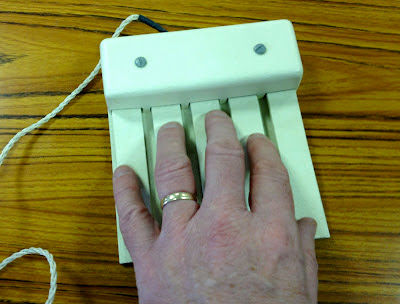 A rare specimen of a human-computer interface used by technology pioneer Douglas Engelbart in his legendary 1968 ‘Mother of all Demos’ presentation will go on public display at the Computer and Communications Museum of Ireland located at the internationally renowned Digital Enterprise Research Institute (DERI) of NUI Galway as part of National Engineers’ Week.

The five finger chorded keyset was used for the first time by one of the greatest of all modern inventors Douglas Engelbart at a presentation in the San Francisco Convention Centre on December 9th 1968. It was a seminal moment in modern history as it introduced many of the key technologies of the Digital Age such as the computer mouse, video conferencing, word processing and hypertext. The keyset was used in combination with one of his other new inventions, a three-button mouse, to allow fast data entry and computer interactions.

The artifact Is on loan to the museum from Karl Flannery of the Galway-based Storm Technologies who received it from Engelbart in the mid-1980s whilst working in the USA.
At the time of the ‘Mother of all Demos’ in 1968, Doug Engelbart was working at the famous Stanford Research Institute located in Menlo Park California.

The keyset will go on public display at 3pm on Saturday March 3rd as part of National Engineers Week and will form the centre piece of a fascinating collection of artefacts that represents significant milestones in the history of communications technology. 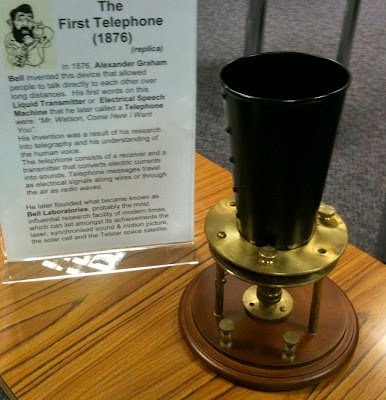 Bell Laboratories of New Jersey, probably the most influential research facility of modern times, has loaned to the museum for one more month replicas of the world’s first telephone and first transistor.
The telephone or ‘electrical speech machine’ was invented by Alexander Graham Bell in 1876. 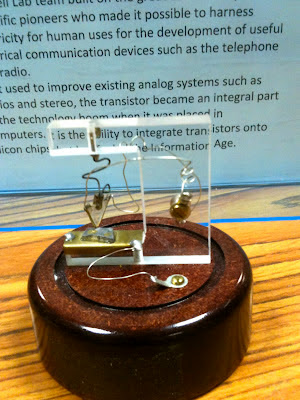 The ‘transistor’ was developed in 1947 and became the building block of modern electronic devices. Bell Labs, owned by the Alcatel-Lucent corporation which is a partner of DERI, can list amongst its achievements the laser, synchronised sound and motion picture, the solar cell and the Telstar space satellite. 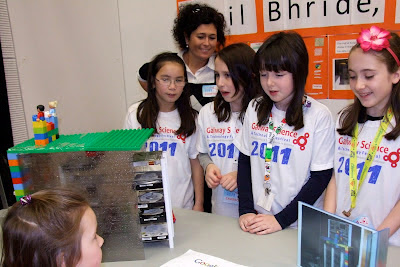 The museum also has a replica of the original Google server from 1998 that was constructed by Scoil Bhríde Menlo in conjunction with  Cumann na bhFear in Ballinfoile. The company’s founders, Larry Page and Sergey Brin, put together a server consisting of 10 hard disks of 4 gigabytes each, then the largest capacity drives available, encased in a cabinet covered with children’s Lego bricks.
This school was selected for this task as Google was founded in a garage in Menlo Park, California, so named in the 1850s by  two Irish immigrants,  Oliver and McGlynn, in honour  of their Galway birthplace.

The Computer and Communications Museum of Ireland operates under a multi-sectoral board chaired by Dr. Chris Coughlan of Hewlett-Packard with representatives from Engineers’ Ireland, NUIG IT, GMIT, small businesses and Irish Diaspora groups as well as DERI.