The Hypocrisy of ICTU bosses 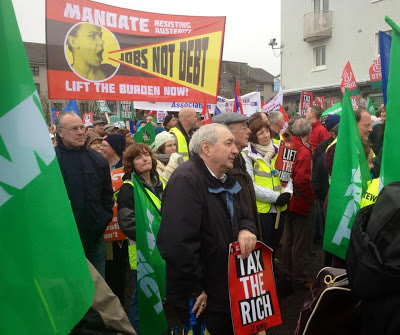 I happily took part in yesterday's ICTU (Irish Congress of Trades Unions) march in Galway against the austerity policies of the Labour-Fine Gael government.
I joined the march because of my concern over how this government is continuing the policies of the last government in making ordinary individuals and communities pay for the greed of the bankers, property speculators, politicians and compliant trade union leaders. So i joined a protest that was made up of those that are at the front-line of the cuts, namely the teachers, nurses, firemen and community workers.
The organisers said there was 5,000 participants. I think that was too big an estimation. But it was still a good size crowd. The first speaker on the stage stated it was the largest protest parade that the city had ever seen. He was totally wrong on that sweeping statement as I have participated on many Galway marches that were much larger including the protest outside Labour Party conference in 2012.

But I was particularly angry at the hypocrisy of trade union leaders on stage in Galway and elsewhere condemning government cuts when they were an integral part of the 'old boys network' who enjoy(ed)  lavish wages, pensions, expenses and membership of quango boards. In the latter, they failed to see or do anything about corruption and misuse of public funds. "See no evil, speak no evil" was their motto.

Time and time again, these overpaid mandarins have defended privilege and vested interests, from the huge wages of top civil servants to protecting the King's Birthday and Empire Days as days of rest for public service workers. So much for their republicanism and socialism!

This year we celebrate the great lockout of 1913. James Connolly and James Larkin though would have nothing but contempt for the majority of today's trade union bosses who have little in common with the lives of ordinary people, but share so much with the lifestyles of William Martin Murphy and his fellow villeins.