Memories of the Lisdoonvarna Folk Festival 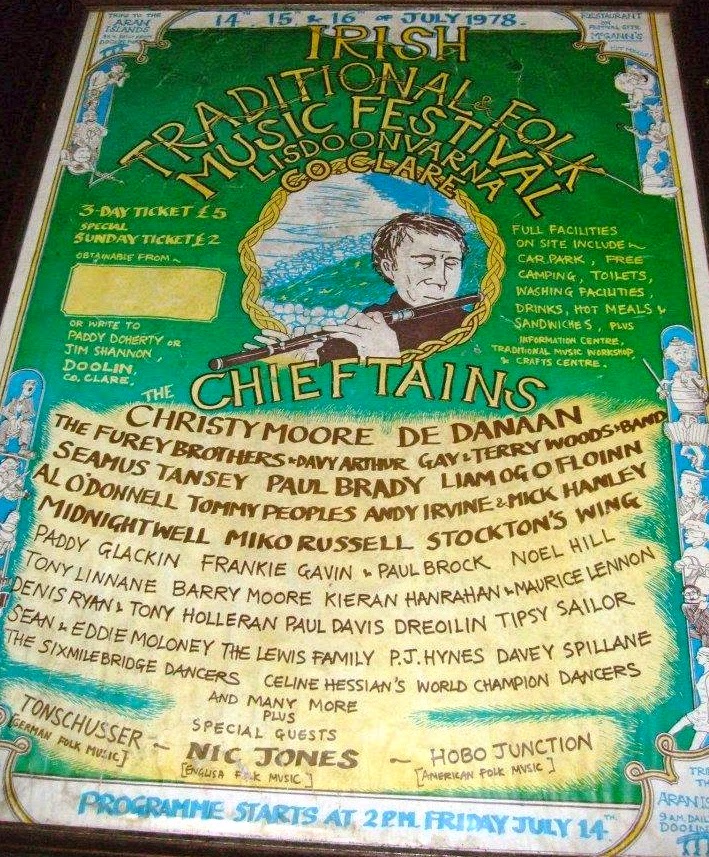 Ireland's first weekend youth musical festival took place during the summer of 1978 in what was then a backwater- Lisdoonvarna in County Clare. Thanks to the foresight of Jim Shannon and Paddy Doherty, it was the Electric Picnic of its time & an Irish equivalent of Woodstock.
The festival was billed as a Folk Festival. But though it started as an upbeat all-Irish Feilé, it expanded its repertoire over the years and hosted some of the finest musical acts on the planet including Jackson Browne, Van Morrison,  Rory Gallagher, Emmylou Harris and Planxty.
The  scene that greeted arrivals was a countryside of stone walls, small fields and narrow botharíns. But from this unlikely landscape sprung forth a huge tent city populated by amongst others, students, German hippies (from Clare & south Galway), Irish trad aficionados, Hells Angels, Hare Krishnas, left wing revolutionaries... Of course with so much young people on one site, undercover cops were also present, making the odd arrest for possession of hash etc.

Largely peaceful, the 1983 festival was marred by eight drowning fatalities at nearby Tra Leathan and by the violence that broke out when Hells Angels, inexplicably hired as festival security(!), started to beat up some of the festival goers. Thus ended a magical festival that corresponded too and reflected much of my fun  student days and my political awakening.

For me, my happiest memory was in 1981 when Irish supergrpup Moving Hearts (Christy Moore, Davy Spillane, Declan Sinnott...) played highly politicized songs from their album of the same name. Songs such as 'No Time for Love', 'Hiroshima Nagasak'i and 'Before the Deluge' reflected the conflict in Northern Ireland, the H-Blocks, the early global environmental and the anti-war movements that were a largely youthful response to the real threat of mass annihilation that could have emanated from the 'Nuclear Arms Race' then taking place between the USSR and the USA.

Just watching RTEs How Ireland rocked the 70s ... fantastic memories of music, adventure, craic, pints and friendship with strangers. Brilliant atmosphere - it was a formative time for our generation - which gave us a positivity, sense of comfort-in-our-skin and a confidence that would not exist today only for it!