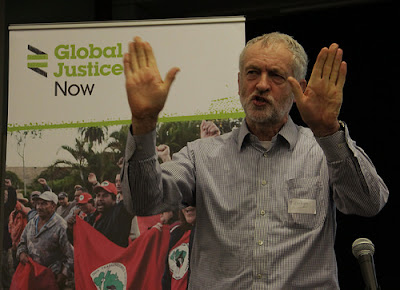 Congrats to Jeremy for winning by a landslide the leadership of the Labour Party. Hopefully this will be a return to truthfulness, justice and radicalism fo a party that under Blair and others became pro-big media, pro-spin, pro-banks, pro-nuclear weapons, pro-military invasions, pro-austerity and pro-billionaires.
Unlike Blair and co, Jeremy will not suck up to media barons such as Murdoch, oil-rich Arab totalitarian regimes and American war-mongering neo-conservatives. All over Europe new popular movements are shaking corrupt political systems that are too often in league with a tax-avoidance elite made rich at the expense of ordinary people’s rights.  As with the Scottish National Party and Syriza, Jeremy is part of this tidal wave demanding change.
It will not be easy to re-establish community grassroots democracy in England. The stakes are high to break the stranglehold of the few. But I firmly believe that ultimately 'people power' will win out.