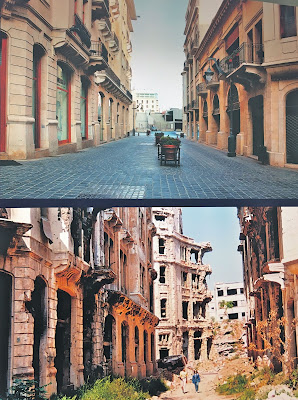 The two photographs above are not some of those being shown a lot recently of Aleppo past (beautiful) and present (ruins). Rather they show Beirut as it is now (top) and as it was (bottom).

The horrors being endured by the peoples of the Middle East seems to be only getting worse. In the last days of 2016 and the first days of 2017, bombings of civilian areas, massacres of unarmed men. women and children as well as forced population movements continue unabated.  Yemen, Iraq and Syria are turning into wastelands. The scenes on our television screens of Aleppo showing miles and miles of streetscapes lying in ruins are reminiscent of Berlin, Hamburg and Dresden at the end of World War Two. We have all seen the photographs of Aleppo then (glorious) and now (desolation). These images could also come from other Syrian cities – Homs, Deir ez-Zor, Daraa…
Promises of a better future and a return to the normality before the men with their guns, tanks and bombs came seem to be an impossible dream.
But there is hope that this nightmare will end.

Only ten years ago, Beirut was synonymous with death and destruction. Once known as the Paris of the East, civil wars and military invasions from 1975 onwards reduced the Lebanese capital to rubble. Armed militias, military checkpoints, air bombings, kidnappings, sectarian killings, religious conflicts and foreign occupations transformed the city and countryside into a nightmare world reminiscent of scenes from the film Mad Max
A few months ago, I travelled to Lebanon to teach coding to Palestinian and Syrian  refugee teachers as well as to students in Lebanese schools.  In a country of only 4+ million citizens, there are over 2 million refugees mainly from Syria. This is a putting a huge strain on an already fragile Lebanese society. A national political deadlock of 29 months was only ended in November when the post of Presidency was finally filled. Mounds of waste were highly visible on inter city roadsides and in front of major buildings as a result of what many Lebanese say is due to endemic political corruption. The garbage crisis is so bad that there is a fear that it could contaminate the whole of the Mediterranean Sea.
Yet is spite of the past and present problems, Lebanon still inspires me and fills me with grounds for optimism.
The capital city is being rebuilt. Hotels are welcoming foreign tourists. Couples kiss, hold hands and share romantic moments together in public places. Families cycle along the seafront. Unaccompanied women drive cars, walk the streets, socialise together. The cafes and bars are full of young people. The streets around the American university are awash with students of both sexes and of different cultures. Mosques and churches exist in relative proximity. Public museums, galleries and hotels welcome visitors. No other country has done more to welcome refugees than Lebanon.
All of this takes places in what was until very recently a brutal urban battleground. Of course this is not to ignore the serious social problems that still exist. Women complain of experiencing sexual harassment on the streets; the refugees often live in cramped poor neighbourhoods; corruption and political patronage are talked about openly; and the urban geography is based along religious and ethnic lines. 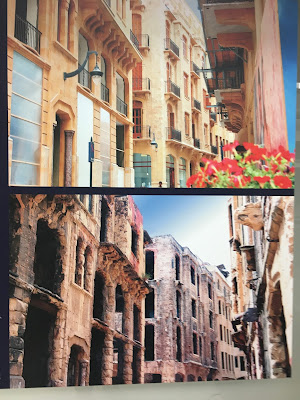 But the most important thing is that Druze, Christian, Shia, Sunni, atheist, Armenian are living and mingling in the same city with lines slowly blurring as time moves on.
In spite of the fragility of Beirut society, it offers a possibility of a return to the past for the Middle East. For this region that was the cradle of civilisation never belonged to one faith, one people or one ideology. For thousands of years its cities were always mixed, always cosmopolitan.
I sincerely hope to be given the opportunity to once again work in Lebanon as part of the ambitious and highly beneficial 'Refugee Code Week' learning initiative.