30 year Struggle for Opening of a Local Community Centre continues 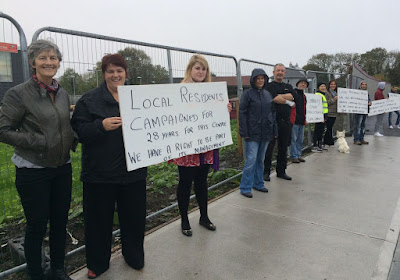 As someone who actively campaigned for the Ballinfoile – Castlegar Neighbourhood (& Sports) Centre from 1987 until late 2016, I am frustrated and annoyed this much needed facility still remains closed.
I did not put my name forward for election in November 2016 to the new (with its inclusive representivity constitution) community centre committee as I (and indeed all local activists) felt that the campaign to secure its opening, after years of community activism, protests/lobbying, was finally completed as local residents and councillors were publicly informed by the CEO and other city officials at that month's council meeting in City Hall that the this neighbourhood and sports facility would be open in January. So I expect that all members of the excellent newly elected committee thought the same and were probably expecting to be working primarily on management and operational issues.
In fact it is worth noting that the facility was officially opened by Cllr Frank Fahy as Mayor of Galway City in May 2016. Frank was optimistic then that it would be available to the local community soon thereafter. 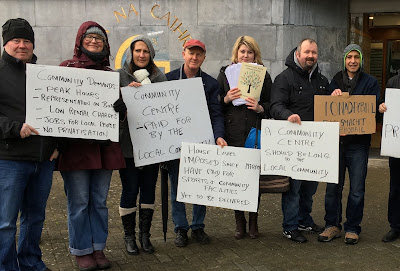 Yes, the centre did indeed open in January 2017 but only for ONE day (to facilitate a public consultation on the Kirwan Roundabout). Local residents heard nothing for months, though of course we expected that the community committee were working hard behind the scenes. Then at a public meeting in the Menlo Park Hotel on May 9th, residents and councillors were informed by a city council official that the terms of a management agreement had finally been agreed in principle with SCCUL and that it was expected to be signed off the following week with an opening date in late August at the very latest. So will this new date be honoured? At this stage there is no reason that I know off why there should be delays by the council’s solicitor in agreeing to have the contract signed. If it does not happen soon, I feel that this represents a breakage of trust with the Ballinfoile – Castlegar community and that the protest/lobbying campaign may need to be immediately reactivated.
Photo is from one of a number of regular resident protests on the centre held outside City Hall and the Ballinfoile - Castlegar Community Centre from autumn 2014 until winter 2016.