Table Mountain: Looking down across a Sea of Clouds 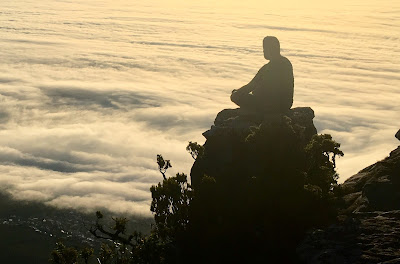 A photograph I took a few days ago from the top of Table Mountain (Hoerikwaggo = Mountain of the Sea) reinforced my sense of wonder at the beauty and power of Nature as well as on how different regions and peoples of the world have been connected for far longer than we sometimes realise.
Six times older than the Himalayas, this 1085 metres high rock formation that towers above Capetown includes volcanic and glacial elements but most interestingly sandstone. To realise that this mountain was formed out of sediment that settled at the bottom of deep waters millions of years ago is truly astonishing.

Looking down across a never-ending sea of clouds (part of Capetown appears at bottom of photo) I could in the aerial gaps catch glimpses of Robben (‘seal’: Dutch) Island, where Nelson Mandela was imprisoned for 18 years, and surviving architectural heritage from Dutch, English and Asian urban settlements, evidence of its colonial past and rich diverse ethnicity that makes it still one of Africa’s most vibrant and cosmopolitan cities. Both the Atlantic and the Indian Ocean are visible; hence the reason why it was initially developed by the Dutch in the seventeenth century as a strategic stop-off refuelling port along the European-Oriental spice trade route.

But even more interestingly I could gaze from possibly the world’s oldest mountain (240million years) towards the location of the world’s oldest evidence of the human species (‘homo sapiens sapiens’) that dates back 100,000 years old. Is this place the cradle of humanity?
Traveling to nearby beaches to witness colonies of Africa’s only penguin species should not come as a surprise when one realises that this region was once joined to Antarctica.

Table Mountain also looks onto landmarks and localities of Capetown that are from my own country. Bantry Bay, Athlone and Clifton beach are reminders that both Ireland and South Africa were once colonies of a British global empire whose rulers often transplanted the names from one region to the next.
I am presently in South Africa to take part in an amazing life-changing project initiated by renowned philanthropist Sabine Plattner that aims to develop a conservation educational curriculum for schools across Africa. Spearheaded by Claire Gillissen supported by an expert team of Ibrahim Khafagy, Bernard Kirk and Julie Cleverdon amongst others, it is another pioneering project to replicate in environmental learning what Africa Code Week did for coding learning across a whole continent.
But that is another story (to follow shortly!).