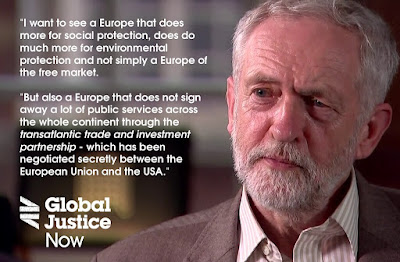 I extend my best wishes to Jeremy Corbyn in today's British elections.
In my lifetime I have never witnessed a British politician so vilified as Jeremy.
The British media(Sun, Times, Express, Mail, Telegraph...), largely owned by tax avoidance billionaires, fear him because of his commitment to make the rich pay their fair share of taxes to fund public services with the result that their news outlets consistently demonise him; large numbers of Labour MPs despise him because he exposed them (‘New Labour’) and their ex-leader Tony Blair for enthusiastically taking part in an illegal war under false pretences that led to the destruction of the Middle East and the death and displacement of millions of people; the right wing Israeli-funded UK politicians of all parties condemn the most anti-racist British veteran of the modern era with a trumped-charge of being anti-semite primarily because of his decades long support for Palestinians and a Palestine free of occupation and colonisation; the Unionists hate him because of his long term support of a United Ireland.
Jeremy has been a lifetime environmentalist, a campaigner against war and nuclear weaponry, for a more democratic EU, and an advocate for human rights and freedom of all oppressed peoples.
I have admired him since my youth when I remember him as a leading campaigner in the Anti-Apartheid and Nuclear Disarmament movements.
If truth, justice and honesty meant anything Jeremy would win today's British general election and be Prime Minister.
In a world beset by Climate Chaos, wars, a new arms race, increasing loss of citizens’ rights, unsustainable consumerism, intolerance, racism, growing inequality, biodiversity loss, and politicians serving greedy vested interests, we need visionary honourable progressive leaders like Jeremy Corbyn more than ever before.