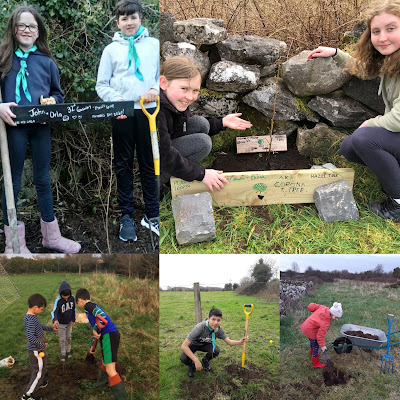 From March 16th until March 18th, the last trees provided by the Galway Science & Technology Festival were planted. The planting was carried out in Menlo by the 32nd Galway (Menlo) Scouts. This was very symbolic as the area is a nature-endowed rural Gaeltacht heritage village lying within the boundaries of the city with the scouts being the original movement that promoted young people of all social classes connecting with and respecting wildlife and the natural world.
Originally it was planned that native hazel trees would be planted on Sunday March 15th in the lead up to National Tree Week by the cubs and beavers on lands made available by the diocese and school near the playing pitches. But the COVID-19 crisis meant this could not happen. So it was decided by the organisers that the trees would be planted separately by local families across Menlo.
A big 'Bualadh Bos' has to be given to Karen McGuire of the 32nd Scouts for her leadership on this issue; to Anne Murray who as manager ensured that tree planting by children and families was a prominent part of the Climate Action-themed Galway Science & Technology Festival 2019; and to Aerogen who sponsored the native Irish trees provided to all schools, as well as many community and youth groups, across Galway city and county. SFI and Coillte also need to be praised for providing the trees planted in a great public Plantathon that took place in Terryland Forest Park during November.
I look forward to all these groups taking on a leading role in the 'National Park City for Galway initiative' whose roll-out with an exciting programme has sadly been delayed by the coronavirus pandemic.