Belarus 2020: A Female-led Revolution that the world desperately needs. 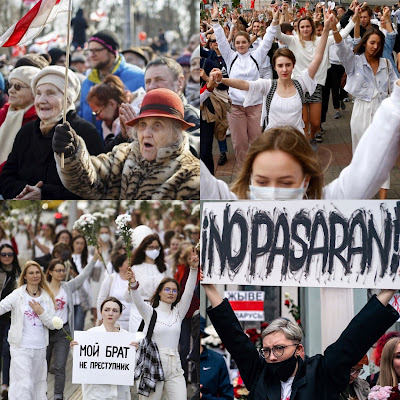 The protests against the dictator Alexander Lukashenko represent the most female-driven political revolution that I have ever witnessed.

Women are at the forefront of the rebellion against a patriarchal chauvinistic ruler whose misogyny can best be summarised in his comment that "Our society has not matured enough to vote for a woman opposition presidential candidate".
He gravely underestimated the power of women.
For it was a female (Svetlana Tikhanovskaya) that was the opposition candidate in the recent presidential election and her key campaign advisors were women. The response to police brutality and a rigged election was not stone throwing and smashed windows but flower-waving women dressed in white (symbol of hope) marching through the streets who, by their courage and leadership, became the rallying call for the rest of the Belarus nation to follow in what has been so far the most peaceful rebellion of the modern era.
A female-led revolution is what humanity needs now more than ever. When the Earth lies on the edge of the abyss due to the man-made Climate Crisis, the male leadership of Britain, China, India, Israel, Iran, North Korea, Pakistan, Russia, USA, Saudi Arabia and Turkey are squandering the world's financial resources on a new machismo ("my missiles are bigger than your missiles") arms race instead of using these monies to tackle poverty, social inequality, pollution and biodiversity loss by dramatically increasing investments in health, education, renewable energies, reforestation and green sustainability technologies.
It is not surprising that the policies and comments of so many of these political leaders, as well as those of other countries including Brazil, Philippines and Somalia, are characterised by a lack of empathy and often open hostility towards women, religious/ethnic minorities and the environment. Bolsanaro, Erdogan, Trump, Putin, Mohammed bin Salman and Ayatollah Khomeini represent an arrogant macho culture that has nothing to offer the world but hate, division, aggression and greed.
It is no coincidence that so many of the countries that have coped best with the COVID-19 pandemic are led by women - Finland, Germany, Iceland, New Zealand, Norway and Taiwan.
It is also worth reminding ourselves that it was the caring nurturing skills of (super)ordinary doctors, carers, first responders, hospital back-up personnel, social workers, teachers and gardeners as well as benign musicians, cleaners, grocers and community volunteers amongst others that got us through the pandemic not the violence of a military, nor the get-rich quick profiteering of property speculators or the brash in-your-face lifestyles of self-centred opinionated celebrities.
For most of the history of humanity, women were society's leaders and worshipped as the 'givers of life'.
But with the capability to smelt metal and create weapons of war from the Bronze Age onwards, it was the male warrior as the 'taker of life' that came to dominate religion and governance.
A patriarchal culture has been but a brief intermission in the over 200,000 years of hominid existence. It is time for it to finally end and to liberate women from all forms of servitude and rediscover a sense of connection and respect with the rest of Nature (Mother Earth) before it is too late.
All power to the brave women of Belarus for showing us all the way forward. Let the men of the police, army and government departments of their country have the awareness and common sense to now stand beside their daughters, sisters, wives, partners, girlfriends, mothers and grandmothers in the common struggle to end oppression.