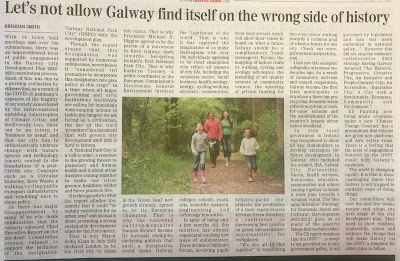 In response to the COVID pandemic-which is just another of the painful but connected symptoms of unstable destructive weather, global warming, rising sea-levels, flooding, desertification, marine acidification, loss of soil fertility and biodiversity collapse that is harming our personal, collective and planetary health- progressive political leadership in cities across the world are working in partnership with scientists, engineers, health professionals, neighbourhoood groups and others to put community, sustainability, public transport, walking/cycling, parks, woods and wildlife sanctuaries centre stage in a radical rethink, redesign and rebuild of their urban infrastructure.
However the recently published report from the council’s Chief Executive, in response to submissions made by so many enthusiastic members of the general public last March on what should be included in a plan that will shape the city development until 2029, scares me.
The top official in City Hall considers that the ‘Galway City National Park City’ initiative (www.galwaynationalparkcity) which he admitted was supported by numerous submissions-and which wants to make Galway a city where places, people and nature are better connected-was “premature to incorporate into plan policy at this stage”.
I am deeply worried that our city could now find itself on the wrong side of history with outdated policies as we witness other cities across all continents rise to the challenge of building a better urban future and who are coming together to follow the inspiring lead of London which adopted this designation in 2019.
I am earnestly hoping that the majority of our councillors will display the vision, the courage and the political leadership that is so needed at this critical time in the history of humanity as we try to navigate through uncharted waters in stormy unpredictable dangerous weather. But as Duncan Stewart stated recently the National Park City initiative could make Galway the “Lighthouse of the World.”
Please read my article on this issue from a recent edition of the Galway Advertiser