Joe Murray - One of life's gentlest and kindest gentlemen is no longer with us. Ar dheis Dé go raibh a hanam 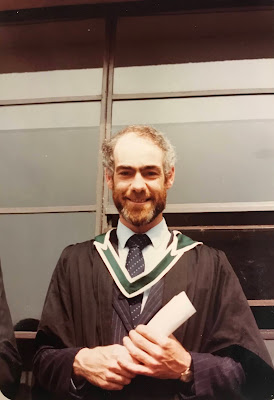 Today I attended the funeral mass for Joe Murray, a true friend and comrade from my student days at UCG.
Joe was our local postman when I lived then with student friends in a rather famous/infamous(!) rented house in Hazel Park. Many's the night Joe would pop in for tea and a political chat when he was out campaigning/leaflet dropping for the Labour Party or earlier in the day after he had completed his postal rounds. It was usually a few hours later that he would cycle off to his homeplace in Shantalla happy in the knowledge that a few of us around a table in a rented house in Galway had analysed and come up with solutions to all of the problems of the world!
We struck up a friendship then that has remained strong over the decades in spite of years apart. He was a man with a heart of gold, an analytical brain, a soft sense of humour and a gentle smile. Friday before last was my final visit to Joe in hospital when we were making arrangements for his bike to be brought to Richard Walsh's Woodquay for repair before I was to cycle it to the Eglinton Direct Provision Centre where it was to be handed over to an African friend of mine that needed it. This was Joe's request to me. He wanted his bike, that was his mainstay for so long, to be given to a person that could really benefit from it. During our bedside chat, after we finished watching the Lions-South Africa test match (he loved rugby with a passion) on his iPad, Joe proudly showed me the letter that he had recently received from our mutual friend President Michael D. Higgins.
It meant so much to him. For Joe was one of the reasons why Michael D got elected multiple times as a Galway councillor, as a TD and finally as President of Ireland. As a life long Labour Party member, he was one of those dedicated, reliable, hardworking, solid foot soldiers that was out there every night and day, hail rain or snow, ensuring that Michael's philosophy of liberty, fraternity and egalitarianism were known.
Our President, being the loyal caring person that he is, was in the church today along with his darling wife Sabina. Neither of them have ever lost contact with their old friends from the early days of struggle and campaigning when we were all (from an array of left wing parties and from no parties) fighting for a better just and more humane world.
Along with chatting to Catherine Connolly TD, councillor Níall Mc Nelis, Andrew Ó Baoill and Nuala Nolan, it was especially lovely today to see so many of the activists from the time when Michael D. was first elected to Dáil Éireann attending his funeral to give their respects- Niall Kelly, Liam Boyle, Pat Hardiman, Peter Kenny, Liz Hackett, John Cunningham.... Joe's friends have been his friends for so long- it was a tribute to his warm endearing character.
Joe was an old style socialist and trade unionist who wanted to ensure that the working class overcame centuries of exploitation to secure political power. It was therefore appropriate and a tribute to Joe’s life-long and deeply held political beliefs that musician Greg Cotter gave a wonderfully powerful moving rendition in the church that he loved of the classic American socialist song ‘Joe Hill’ "...In every mine and mill, Where working men defend their rights, It's there you'll find Joe Hill...". It brought tears to my eyes as it reminded me of many battles fought but not always won.
My last campaigning meet ups with Joe were in December/January when he was gung-ho about ensuring our fellow UCG progressive Mike Jennings got elected to the NUI Galway Governing Body.
Joe knew for many months that he was dying from cancer. We had our last coffee together in June in a café near the hospital where he had just come from one of his regular clinical visits. After the banter and the sharing of stories, I told him that he would of course feature in my book coming out next year on “UCG Student Days & Nights”. The book will be richer for his presence.
The photo is one I took of Joe in 1984 at his summer graduation in University College Galway (UCG). No wonder he has such a broad smile, for Joe and his fellow students made history that day being the first class to graduate from the part-time evening BA programme. This degree was a trailblazer for the university, as it represented an early attempt to reach out to ordinary working people from office, factory and shop in providing third level qualifications.
Rest in Peace Joe

Hey Brendan, I enjoy reading your blog when I get a chance. Although I have never met Joe RIP, I feel like I have known him after reading your lovely tribute to the man.
You too are an exceptional human being full of giving to country, community, family and humanity. I feel proud to have known you in the secondary school years.
Keep up the good work.
Mac

Wow! Thank you so much Mac for that lovely comment. You are making me blush Mac. I have to say from my perspective it was so good to be your classmate and friend at the High School. We had an exceptional group of friends in our time together in Carrickmacross.