Israel's present campaign against the Lebanese civilian population & Palestinians in Gaza has finally unveiled the 'fascist' idealogy that exists at the heart of its state and its backers in Washington. By pure militaristic and terrorist tactics, both countries (& Britain) are trying to ensure that no country in the Middle East threatens Western control over its oilfields while also ensuring that Israel continues to re-draw the boundaries of Palestine to the detriment of the Arab population. 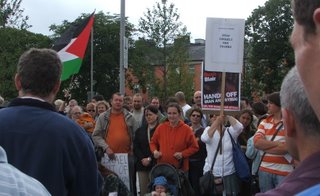 European governments & the European Union have consistently done little more than gently complain about Israel's wars of aggressions against its neighbours. It has been reduced to imitating the squeal of a mouse rather than the roar of a lion.
Fear of the USA has castrated our political leaders' sense of injustice.
The big naval fleets of Europe gathered off the coast of Lebanon not to protect the citizens of the democratic and liberal state of Lebanon from armed invasion but to meekly seek permission of Israel to evacuate its own citizens before the coming firestorm.
Sadly all the millions of ordinary Europeans that have protested against the invasions of Lebanon & Iraq have not changed their government's cowardice. 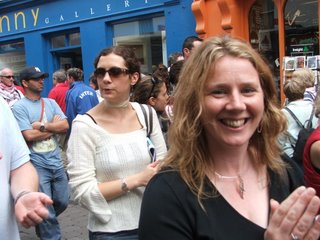 (Photo shows Marie Crawley, an old campaign stalwart friend of mine, on the protest march. Poor girl- she came to Galway from Northern Ireland to leisurely enjoy the Arts Festival activities only to find herself out demonstrating!)
Yet what choice do we have but continue our street demos and hope someday that public opinion will win out and that the Middle East, Chechnya, Columbia, Mexico, Tibet, Kashmir, Afghanistan, Sudan...will no longer serve as the playthings of the big powers and their local puppets but that true democracy and human rights will blossom?
Recently a few hundred Galwegians of all ages led by the Lord Mayor marched through the streets of the city and demanded that the Irish government do more to end Israeli aggression...One can only live in hope that every individual action & every little protest will collectively make a change occur. Fool's Paradise? Maybe, but our vision of a better world may someday become a reality. Even if we never live to see it, we will have played our part. For why else do we exist? 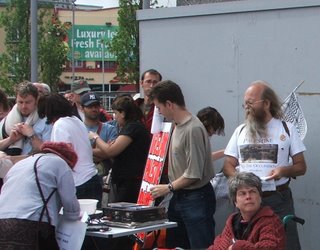 (On the right of the photo are Doug -long beard!- & Ann, two highly motivated & veteran anti-war activists from America. Doug is actually a work colleague of mine at Galway university. Being 'anti-war' has nothing to do with being 'anti American'. In fact some of the fiercest critics of present U.S. foreign policy are Americans such as Michael Moore, Bruce Springstein, Susan Sarandon, Cindy Sheehan... ) 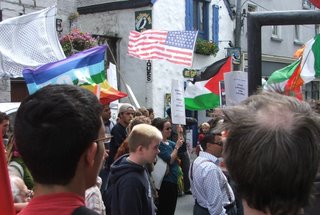 The protest ended at the constituency offices of senior Irish government minister Eamon Ó Cuiv when hundreds of letters demanding firm government action against Israeli aggression were handed in. It is strange that this minister & our city's anti-war Mayor were earlier that week my special guests of honour at a university reception organised for my asylum seeker students -see my posting of August 1st-!! But that is the great thing about Ireland, we can disagree fundmentally on some issues but work together on areas of common agreement)

Israelis have Lost all Sense of Humanity
Finally, I recommend everyone to look at the following website that my friend Bill from India sent me which shows in gruesome detail the aftermath of Israel's indiscriminate bombings of civilian targets. Please note that it is not for the squemish
www.globalresearch.ca/index.php?context=viewArticle&code=20060721&articleId=2787

this is really a well constructed blog posting. Congratulation.

As bloggers we generally comment on (rather than report) news, but we should always provide the source of the news on which we are commenting.

Any chance of a demo about Syria or Libya ?

Sandro, if you are organising a demo aabout Syria or Liby, keep me informed.

I have written a number of times about repression in Arab countries. Check our for instance
http://brenspeedie.blogspot.com/2010/12/dying-embers-of-middle-eastern.html