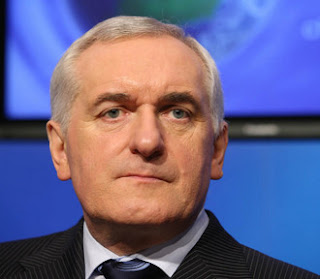 As holder of some of the most important offices of state, Bertie Ahern abused his powers as a democratically-elected politician for personal gain and that of his 'property speculator' friends of the 'FF Galway Tent'. But he was not the only one as the level of corruption was endemic in the 'body politic'. Time now to strip him, Padraig Flynn and their cohorts of all their taxpayer-funded pensions & perks. Time now to do likewise to those Ministers of the last government that sold our country to benefit so-called 'developers', greedy bankers and incompetent top civil servants.
These politicians are traitors. liars and thieves who betrayed the electorate of this country.

Read Irish Times article about the lies perpetrated by Ahern