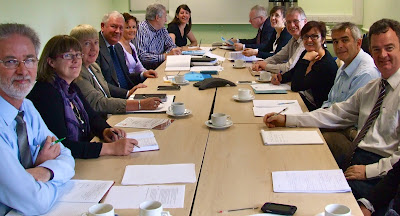 A dear colleague and Champion of Science was buried yesterday.
Without doubt Tom Hyland was one of those legendary few individuals that can justifiably claim to have nurtured and shaped modern Galway.

As head of the Industrial Development Authority (IDA) of Ireland Western Region for much of the 1970s through to the 1990s, he helped attract high profile global investment and companies to Galway, ensuring that the city became one of the country's key hubs of industry and business.
Following on from the pioneering work of Bernard Kirk , who was supported by former science minister Noel Tracey and Dr. James Browne (now President of NUI Galway) in initiating the Galway Science & Technology Festival in the late 1990s, he in his capacity as chairperson helped steer it to become the largest annual STEM programme of events in Ireland.
As a member of the Festival board since the early 2000s, I saw at first hand how his single-mindedness and determination ensured that our goals and aspirations each year were met and surpassed.


The photograph above that I took shows Tom (fourth from left) with fellow members of the great board of 2010 that was the team that successfully transplanted the Science Fair (the finale of the two week long Festival) from Leisureland in Salthill to NUI Galway.
This move represents one of the key milestones in the history of Science, Technology, Engineering and Mathematics (STEM) Outreach in Galway. The university location brought science to a whole new audience with crowds of 22,000+ enjoying an array of exhibitions, workshops, talks and shows across the whole campus unmatched by any similar event nationwide.