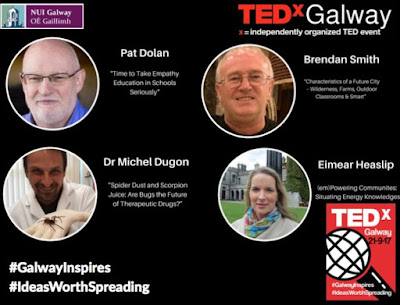 What an experience! Having done the 'walk' so many times, I now had a once-in-a-lifetime opportunity to do the 'talk'.
To say that I wasn't nervous having to take part in such a prestigious event and summarise such an important topic as I had in 18 minutes would be untrue. To be honest, I was a nervous kitten in the lead-up to the event. So unlike me!

But surrounded by professional speakers all experts in their own field in such a prestigious venue as the Town Hall Theatre in front of a sell-out audience who I knew would scan a critical eye over word I spoke and every gesture that I made, weighed heavily on me.
Anyway, I gave it my best shot on the night; thankfully I did not freeze or forget my words and so hopefully I gave justice to the hard work of all community campaigners, environmentalists and the socially aware Web/Internet of Things technologists of  Galway city and beyond.

My theme was on the urgent need for cities to be Green and Smart.
My advanced preamble was:
“As the Earth is being transformed into an Urban Planet characterised by an unprecedented growth in human population, energy consumption, technology revolutions, depletion of finite resources, huge mega settlements and climate change, the future of the human species is under threat.  So cities, the new abode of our race, have to radically transform in the areas of energy, transport, health, water, food, environment, social, housing, governance and work if they are to accommodate huge numbers of inhabitants in a way that gives them a beneficial quality of life that is sustainable.
Brendan Smith looks at the need to bring nature back into our everyday urban lives. Using Galway as an example he makes the case that, as well as relying on smart technologies, cities have to be characterised by organic farms, community gardens, rooftop/exterior building vegetation, woodlands, waterways, outdoor classrooms, Greenways and local community stakeholdership. “
The Galway TEDx talks will be up on YouTube in the next few months. In the meantime I will publish a longer written version of my talk in late October (when my travels to Africa and the Middle East are completed for this year).

Finally I would like to give a big public thank you and a traditional Irish ‘Bualadh Bos’ to two brilliant hard working creative gentlemen, namely Darragh O'Connor​
and Cormac Staunton who were the brains and brawn behind TEDx Galway. With a wonderful range of international, national and local speakers and an eclectic mix of subjects, they did a superb job. Darragh- you have a wonderful future ahead of you as a 'Master of Ceremonies' extraordinaire.