Denizens of a Winter Wonderland: the Magical Hazel Tree. 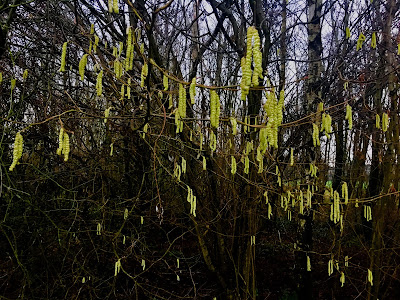 I took this photo on the evening of St. Stephen's Day in Terryland Forest Park. It captures somewhat the mythical nature of the Hazel tree, with its catkins almost luminescent in the rising darkness.
The Hazel in Celtic mythology is associated with magic, wisdom and poetry. Its fruit- the hazel nut- was a great source of nourishment in ancient times and is still collected by local families in the autumn. Its wood was used for making furniture, fencing and wickerwork. In our community garden we have used it in conjunction with willow branches to make fences.
Druid wands were made from hazel. Because the tree grew near water, it also has strong connections with fertility. It was believed too that the source of Ireland's most scared rivers, Shannon and Boyne, were to be found at wells guarded by hazel trees whose nuts would impart great knowledge and magical prowess to those that eat them. Its twigs were used by diviners to locate water underground.