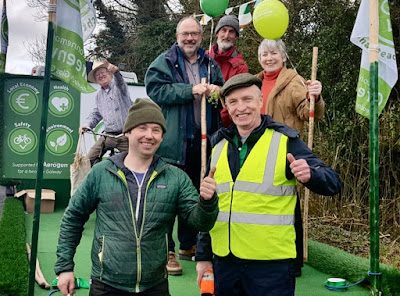 It was a joy to help, as a committee member, organise and to take part in the 'Connemara Greenway' presence in the St. Patrick's Day Parade in the village of Moycullen.
We had two large populated colourful floats (thanks Gary, Brian & John!) with a moving mass of volunteer cyclists and walkers of all ages, representing the largest presence in the parade. All along the route, we were greeted with smiles, cheers and clapping from onlookers! Rousing calls from the parade MCs that no more delays in the building of the Greenway would be tolerated was answered by applause from the crowd! It was obvious to all present that the floodgates had opened and the popular support for the Greenway was there for all to see.

Thanks to the herculean efforts of an enthusiastic committee that includes Tiarnan (the founder!), John, Fiona, Brian, Gary, Dick, Terry, and Pat, the campaign for a Greenway along the old disused railway line from Galway city to Clifden has come a long way since we formed two years ago.
Council officials have done really great preparatory work and are working with many of the landowners; most of the local politicians are now actively onboard promoting the facility. The first 5km stretch near Ballinafad opened last summer. But there is another c73km to go! In spite of stories to the contrary, the people of Connemara showed on Sunday that they are overwhelmingly in favour of a Greenway that will go through some of the most picturesque landscapes in Ireland and indeed Europe. This green resource will revitalise many of the towns and villages along the route, and bring social, educational, health and economic benefits. Sustainable eco tourism will be given a much needed shot in the arm. But this Greenway will not only be used by tourists but also by local people as a commuter and social connection.
The people have spoken! No more excuses! No more delays! They want the full route from Galway city to Clifden opened as speedily as possible. Candidates in the forthcoming local elections, please note!!

p.s. In spite of the fact that I have in the photo a tobacco pipe in my mouth, I don’t smoke. It is purely a prop- honest!