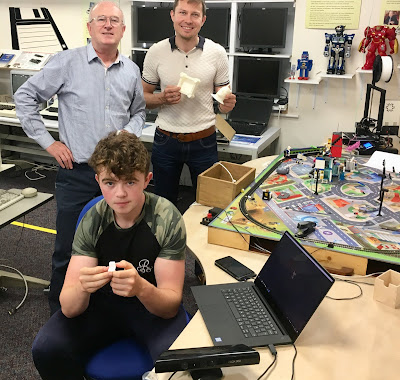 My son Dáire is learning Greenscreen production, AI photo enhancement, 3D scanning and 3D printing from Eoin Jordan, Lukasz Porwol, Ihab Salawdeh and PJ Mealy whilst undertaking a summer internship at our Insight Centre for Data Analytics NUI Galway.
One of the most exciting of these projects is the use, at the Computer Museum in the Data Science Institute, of a XBox 360 Kinect to scan images of vintage computers and computer parts to make 3-dimensional units to be used either as ornaments or to replace missing/broken components of retro units in this technology facility.
In the background is the 3D printer alongside a miniature model of a Smart (sensors based) City where we are gradually replacing the Lego parts with 3D made pieces. Thanks Gerry Kavanagh!
The three lads are holding 3D productions.
As part of our role in the new 'National Park City for Galway' initiative, we will soon be installing a unit that grinds old and new plastics that can be converted into 3D plastic filament. This is the 'Circle Economy’, Upskilling and Sustainability in action!