The Heroes of D-Day 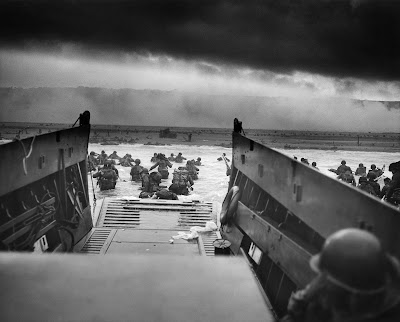 I salute the c350,000 soldiers, sailors, paratroopers and air crews who took part in the Normandy landings on June 6th 1944 supported by thousands of French resistance fighters.
Where it not for their actions and the even greater actions of the Soviet Union military and the guerrilla fighters of Eastern Europe in World War 11, the continent would today probably be still under the brutal occupation of the Nazis, minus its Jewish and Gypsies peoples long since eliminated by genocide, with its Slavic populations reduced to sub-human status and slavery.
Sadly in the following decades, many European, Asian, African and American governments did commit atrocities against other nations and peoples. But the followers of Adolf Hitler represented a special brand of evil that deliberately wanted to bring death and subjugation to much of humanity.
So thank you to the British, Americans, Canadians, Australians, French, Poles, Czechs, Slovaks, Greeks, Dutch, Irish, Belgians, New Zealanders and Norwegians who took part in Allied military operations on this day 75 years ago.
As a child one of my most cherished possessions was ‘The Longest Day’ written by the Irish author Cornelius Ryan, probably the best book ever written on D-Day. It tells the story of June 6th 1944 humanely and fairly through the memories of French female and male civilians, as well as combatants on land, sea and air, both Allied and German. I highly recommend it.
In the celebrations today I was especially impressed to see two British men who fought on D-Day as paratroopers, once again jump from a Dakota C-47 airplane in the skies above Normandy.
Your bravery was not in vain.

Email ThisBlogThis!Share to TwitterShare to FacebookShare to Pinterest
Labels: D-Day