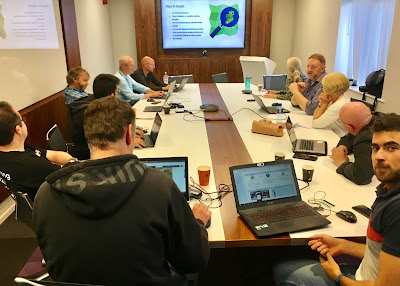 Thanks to all those who turned up today at the Insight Centre at NUI Galway for Galway's first workshop on Open Street Mapping, a free, editable map of the whole world that is being built by volunteers. The underlying electronic data is open-sourced and crowd-sourced.
There was a nice mix of attendees from different backgrounds who came along to learn about or to share their experiences and knowledge of Open Street Mapping.
A big thank you to Ciaran and David from Ireland’s OpenStreetMap (OSM) community, who enthused everyone present and to Lukasz Porwol​ and Agustín García Pereira​ as well as to Niall O Brolchain​ for their excellent organisational work.
We at Insight will host another similar event during November as one of a series of very exciting "Citizen Science" activities we are organising for the Galway Science and Technology Festival whose theme this year is Climate Action, and as part of the new National Park City for Galway initiative which will really kick in during October.
So watch this space!

So why is Open Street Mapping (OSM) important?
All over the world, there are restrictions on the availability or the use of map information. OSM aims to remedy this by generating a free, editable map of the world. To date four million people have come together to contribute data to OSM. These volunteers collect data using manual surveys, GPS devices, aerial photography, and other free sources. This crowdsourced data is then made available under the Open Database License.
OpenStreetMap contributors have diverse interests and work at differing scales. Some people map their locality, while others work on themes such as public transport, the built environment, graveyards, tree cover, beaches, churches, sports grounds, greenways, energy infrastructures and many other things.”
OSM Ireland is affiliated to the worldwide volunteer movement. The purpose of the Galway chapter is to promote contributions of mapped data and re-use of the data, both locally and globally. We expect that many local community and environmental activists will become enthusiastic mappers over the next few months.

Photo shows one of the two workshop groups that took part in today's event.