40+ years on and we are still protesting at Eyre Square! 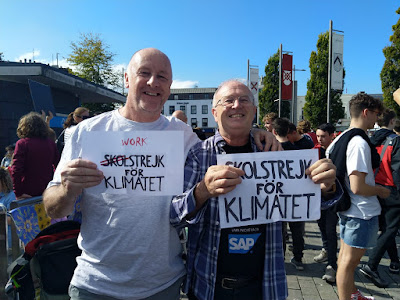 It was great to join my good friend Mick McArdle and his teenage son from Kinvara in the youth-led Climate Action protest this lunchtime in Eyre Square. It brought back happy memories of our time in UCG during the late 1970s when Mick and myself regularly joined hundreds of other young students in marches and protests to Eyre Square on many different campaigns on many different issues but with a common denominator of justice, equality and a better life for all in Ireland and across the globe.

Decades later we are still there fighting the same or similar battles! Though no longer young, we hope that the same idealism still burns within us. As Mick says, “Still crazy, but active, after all these years.”
I just made it to the protest in Galway as I only arrived back in Ireland at Dublin Airport from Mozambique (mentoring coding workshops for teachers) a few hours before!
Of course marches do not in isolation achieve positive change. But they are often a very positive step in the process to do so