Proud to be Irish in Tanzania! 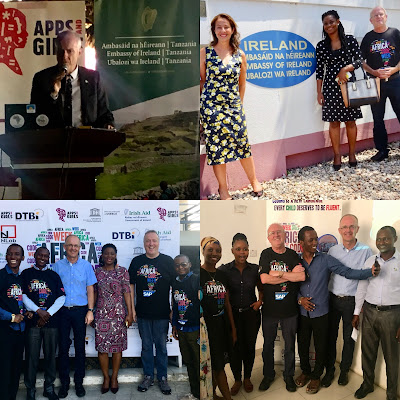 A few weeks ago I was present in Dar es Salaam to listen to the Irish Ambassador to Tanzania, Paul Sherlock, officially announce that Irish Aid, the Irish government's international development aid programme, had become a partner and sponsor of the Africa Code Week(ACW) initiative.
I was there in the companionship of my fellow Irishmen, the wonderful Kevin Conroy and Liam Ryan (SAP Ireland CEO), as well as the visionary Claire Gillissen from France.
It was my third trip to this lovely country in my capacity as a lead mentor and course content developer for ACW. The first time was during the summer of 2017 in the company of Bernard Kirk, Camden Trust CEO/ Director of the Galway Education Centre, and Ciaran Cannon TD, then newly appointed Minister of State for the Diaspora and International Development.
This Irish Aid announcement continues a long tradition, going back to the 19th century, of Irish people being involved in supporting the continent and its people in the areas of education, health, community development and human rights.
In so many African countries that I have visited since 2015, I have talked to Africans that tell me fondly of the help that they have received from the Irish. In Uganda it was a senior civil servant called Patrick who was taught by Irish priests; in South Africa it was a Muslim teacher who was given his schooling by Irish clerics; in Ethiopia it was a NGO manager applauding the work of Trócaire and Camara in his country; in Tanzania it was the teenagers of the Holy Union Sisters Debrabant High School praising their principal, Sister Annette Farrell from Kilconnel in east Galway.
Unlike some other European countries, Ireland never came to Africa as an colonial power to brutally rob it of its human and natural resources. We came not as conquerors but as educators and healers. During the days of the British Empire, when our own country was a colony, our countrymen and women often arrived as teachers and doctors to countries such as Uganda, Kenya, Nigeria and South Africa. It was said by many that I have met during the course of my travels across the continent that, where it not for the Irish clerics, their parents and grandparents would never have got an education. So many leaders of the independence movement were taught in Irish-run schools.
This Irish tradition of education and community empowerment continues with the ongoing work of Trocaire, Concern, Gorta Self Help Africa, Goal and Irish Aid that includes individuals that I have known and that I have the upmost respect for, such as Ronan Scully, Alan Kerins and Diarmuid Ó'Brien.
But this tradition also got a major technology learning surge in recent years with the involvement of Irish personnel of SAP Ireland and of Camden Trust as trainers in the wonderfully inspiring Africa Code Week. Along with Claire Gillissen, Bernard Kirk played a fundamental role in establishing in 2015 what today is surely the largest pan-Atlantic digital literacy initiative in the history of the continent. Thanks to the great organisational skills of Sunil Geness, Ibrahim Khafagy, Julie Cleverdon, Ademola Ajayi and so many other great Africans, it is supported by 28 governments, partnering 130 partners (mainly local NGOs), has been rolled out to 37 countries and has provided coding workshops to over 4.1 million youth and teachers.
The aim of Africa Code Week is to build community capacity to drive sustainable learning impact across Africa instilling coding skills in the young generation.
So I give a big and sincere 'Bualadh Bos' to my fellow Irish men and women who worked with me in Africa as part of ACW- Kevin Conroy, Nuala Dalton, Nuala Allen, Cliodhna and Aoife Kirk. Africa's time has come and they have helped it to happen