After the Euphoria came a Desolation! 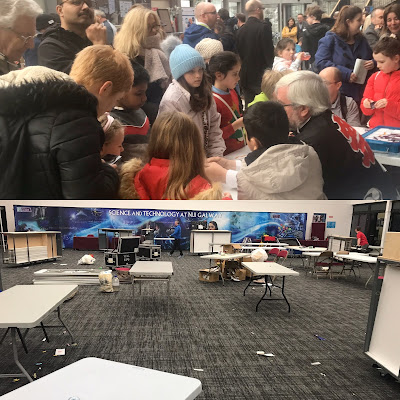 What a wonderful finale yesterday's Science Fair was to a fun-packed but meaningful two weeks of the Galway Science and Technology Festival, the largest series of events ever held in Ireland on the theme of Climate Action.
This theme was there for all of the 20,000+ visitors to witness yesterday in the lectures, workshops, debates and exhibits available across the wide expanse of the university campus.
The corporations, small companies, innovators, science communicators, educators, third level researchers, secondary schools, primary schools and youth clubs were joined this year for the first time by Community NGOs who are advocates of Citizen Science.
The enthusiasm for making a contribution in the battle against Climate Chaos was so evident, from the large corporate displays from the likes of Medtronic to the nine year old budding scientists demoing their classroom's renewable energy or biodiversity projects at a small rural school stand.
There are so many people to thank which I will endeavour to do so in series of postings over the next number of weeks.
I will start though with the hardworking on-the-ground behind-the-scenes team of committee members, staff and volunteers led by Simon Lenehan,Anne Murray (Festival manager) and Liam Brennan supported by Brid Seoige, Gavin Collins, Muriel Grenon, Donal Leech, Tracey Ferguson, Paul Mee, Colette Lavin and Lorraine Tansey who were involved in preparing the campus in advance for the huge volume of visitors expected, and finally in the dismantling of the exhibition spaces after the crowds had departed. It was like a scene after a tornado. But for all of us still working there last night, it was so satisfying. For it was a 'good day'