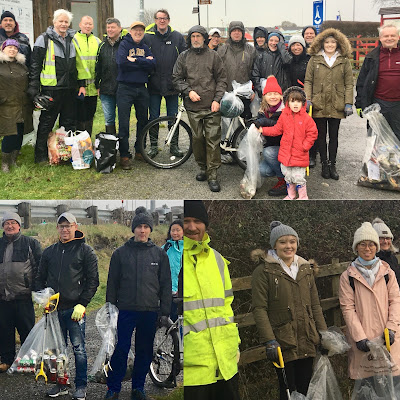 We are asking the people of Galway to take part in a litter pick on General Election Day (Sat Feb 8th) to help protect our precious land and aquatic mammals, birds and insects that live in our woodlands, rivers and in the seawaters of Galway Bay.

It is so appropriate that this event is  being organised by our good friends in the Galway Atlantaquaria (Ireland’s National Aquarium) Clean Coast group. For what is dumped in a park or woodland not only kills its indigenous wildlife, but also destroys fragile ecosystems that live in the deepest parts of the Atlantic Ocean.
Take plastic for instance. Approximately 8.8 million tonnes of plastic ends up in the ocean much of it by way of rivers and by being wind-blown, leading to the deaths of at least 100,000 sea mammals annually. Over 90% of the plastic ever made has not been recycled with 50% produced annually being single use and discarded.  Sadly this type of plastic production is still continuing. A representative of Coca Cola, the world’s most polluting plastic brand that produces the equivalent of 200,000 bottles a minute, said last month at the World Economic Forum in Davos that the corporation has no plans to stop using single-use plastic bottles.

So let us the residents of Galway city keep highlighting the need to end the madness of once-off plastic, to increase the protection our precious urban biodiversity zones and keep the pressure on Galway City Council to have more on-the-ground park staff.
Community campaigning last year succeeded in having full time staff appointed to our woodlands. But when our green spaces worldwide and locally are being called upon to provide more trees, to serve as ‘carbon sinks’ and as safe zones for threatened flora and fauna, City Hall needs to do so much more if we are to emulate for instance the labour resources of Dublin’s Stephen’s Green and Phoenix Park.
In November, the people of Galway answered the call to plant thousands of native Irish trees in Terryland Forest Park. Now let us come together to collect the thousands of plastic bottles, beer bottles, beverage cans and other debris that cause so much damage in Terryland and along every seashore, park and woodland in the city and to demand greater restrictions on their manufacture and dumping.

Finally, participants are reminded to make sure to wear suitable clothing and shoes, all should ensure their own personal safety, wellbeing and not take risks.