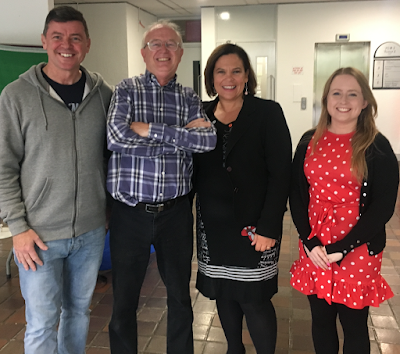 It is great to see so many progressive parties and independents doing so well in this election. In particular the rise in the Sinn Féin vote has finally broken the mould of Irish politics that has been in place for almost 100 years with its capture of nearly 32% of the youth vote (double the combined total of FF, FG and Labour). The tweedledee and tweedledum of Fine Gael and Fianna Fáil has meant that a Thatcherite social and economic conservative philosophy has dominated for far too long. The power of a well-connected elite that includes Denis O’Brien, bankers, landlords, beef barons and property speculators has meant that the land, former state companies, media, services and resources of Ireland have time and time again been sold off to a few well-connected men leaving the country having one of the greatest disparities of wealth in the western world.
Mary Lou McDonald’s performance on last week’s three way leaders' debate was fantastic and showed the Irish people what we were missing when it came to true differences of policy. She raised issues such as the political influence on Irish politics of monied vested interests that none of the main parties would ever have questioned.
In a time of Climate Chaos, biodiversity loss, environmental catastrophe, social deprivation, growing inequality and privatisation of national resources, there is now a golden opportunity to take positive action to create a better future for both humanity and the rest of Nature. A strong united front of left, green and other progressive parties/independents as well as progressive elements within FG and FF can reshape government policies. For I truly admire some politicians in both of these latter parties that have done some great things for the nation including Eamon O’Cuiv in FF and Ciaran Cannon in FG. It will not be easy forming such a grand forward-thinking coalition that includes FG or FF but there may be no choice. The future of the planet and the hopes for a more egalitarian state are at stake.
As a life-long environmentalist, socialist, republican and feminist, I hope that such a realignment can come to fruition even if it means going as a united green/red front into government, but only around key fundamental lines that have to be honoured at all costs. Sadly the history of Irish politics has been one where small progressive parties have gone into government, been gobbled up by the bigger parties and sold out on their principles for the sake of a power that was not real. This time the combined seats of the green/left parties/independents can control the shape and direction of any coalition with either FG or FF to ensure a truly radical programme of government.
In the process though Sinn Féin itself will have to review its attitude towards Irish farming and promote a move away from dairy/beef livestock monoculture towards a more historical and sustainable mix with a strong emphasis on organic tillage, horticulture, native forestry and regeneration/reflooding of the bogs that will revitalise rural Ireland. Furthermore the new government has to take long overdue action against Denis O’Brien, Michael Lowry and other powerful individuals over the findings of the Morarity Tribunal in 2011 which highlighted the influence of the ‘old boys’ network that has undermined Irish parliamentary democracy but which has been collected dust on a shelf ever since.
Finally what is happening now reminds me so much of when I was co-leader of the campaign against Ronald Reagan’s conferring of a honourary law degree (when he was breaking international law in Nicaragua) by UCG (now NUI Galway) in 1984. There was initially strong opposition even anathema by the wide progressive coalition partners against the left wing (there were indeed very right wing elements) of (Provisional) Sinn Féin becoming part of the campaign. I and a few others had to fight hard to ensure their involvement in Galway city’s mainstream protest politics for the first time since the 1930s. But it succeeded and the rest as they say is history.