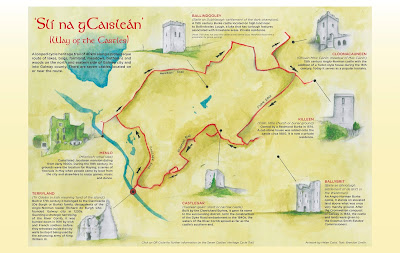 Last week we held the first online (Zoom) meeting of supporters of the Terryland Forest Park from surrounding areas and beyond. It was so beneficial to have residents from areas such as Dyke Road, Coolough, Castlegar, Gleann na Trá, Castlelawn, Ros na Shee(Sidhe), Sandyvale, Skellig Ard, Carraig Bán and Riverside who want to get involved in bringing Ireland's largest urban forest park to a new level of ambition by getting it recognised not only as a wildlife sanctuary and a People's Park with recreational facilities for all age groups, but also as a unique Blue and Green hub of international importance.

With a new generation of volunteers now coming onboard, we can over the next six months work on developing a new website; secure increase information signage; plan out, with the agreement of city council additional wildflower meadows and new seating; as well as hopefully set up a volunteer park rangers unit.
But it is envisaged also that the Terryland Forest Park and the Dyke Road could well become a hub for the Corrib waterways stretching into the heartlands of Mayo; the terminus for the Connemara Greenway with the construction of a bridge on top of the old railway pillars; and, working with local communities, a starting point for a network of walking and cycling trails along the 'boreens' of Menlo, Castlegar and Carrowbrowne. The pioneering Seven Galway Castles' Heritage Cycle Trail/ Slí na gCaisleán that begins and ends at Terryland Castle (see photo with Helen Caird's lovely drawings!) is now twelve years old.
Note: a huge poster of Slí na gCaisleán is on permanent display beside Terryland Castle.
Every large park must have a central multi-purpose building that serves as meeting point and so much more. We must now seriously look at converting the abandoned 19th century waterworks into a forestry/river interpretative centre with café, gallery, heritage museum, toilets and cycle rental/repair shop.
Details of the speakers and themes for this month's Zoom meet-up will be posted on this blog on Thursday. More volunteers and supporters welcomed!