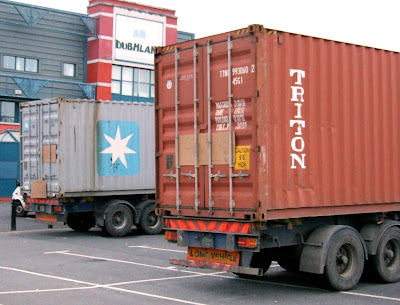 Two Trucks parked outside An Dubhlann (Black Box) Theatre Galway City
Packed with Donated Medical Equipment, Foodstuffs & Clothing for the People of Gaza
When an appeal went out from local activists to donate essential material for the people of Gaza who were so recently the victims of a barbarous invasion by Israeli military forces, the people of Galway responded magnificently.
Two large container trucks were filled within hours with non-perishable foodstuffs, clothing and vital medical equipment that will be delivered directly to Gaza. Enough further material was collected that campaigners are hoping to hire a third vehicle that will travel later.
So well done to the Galway Alliance Against War (GAAW) and Palestinian support groups for organising such a fantastic humanitarian feat and to the people of Galway for their generosity and compassion.
Click here to read my last article on the Israeli invasion of Gaza.

well observed Brendan. Sometimes we can't see the wood for the trees. we should have used this opportunity to showcase our heritage.