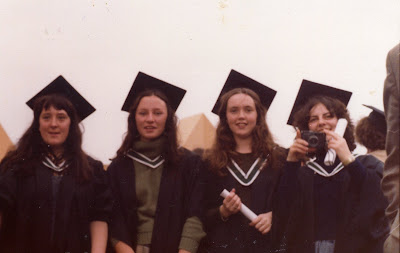 A very good friend of mine and of many others died yesterday.
Joan O'Brien was one of the nicest, warmest, loveliest and engaging persons that I have ever had the privilege to befriend whilst I was a student.
Her engaging smile bewitched all those that knew her.
I was lucky enough to be a friend of hers while we were on campus together in what was considered a golden era of UCG and Galway city.
See www.ucgstudents.com .
She was a part of close-knit circle of endearing female students who lit up the lives of so many of us. Their parties were a legend. Whilst I lived in what was then possibly he No. 1 house for disco parties (No 80 Hazel Park), their chalet on Canal Road hosted the most refined, zaniest and wackiest dinner gatherings that Galway possibly has ever known.
A highlight for me & many of my fellow students was to receive an invitation from Joan and the 'girls' to attend dinner in their abode on a Friday night.
Formal dress was expected.
So we would arrive with a bunch of dandelions or daffodils at the door of their tiny damp-lined broken-down chalet dressed in the finest apparel that we could find, usually an eclectic mix of worn-out coloured shirts, mix-matched bow-ties, odd-fitting jackets and rustic floral dresses.Upon crossing the threshold, we would find ourselves entering a magical Arabian Nights world where the aroma of candles and sweet 'n' sour pork would permeate the air, where soft alluring music emanated from an old record-player lying in a corner, where red napkins and broken floral crockery would adorn the table, where smiling females would serve home-brew poteen and cider freshly arrived from the deep vaults of 'Peter Michaels'. 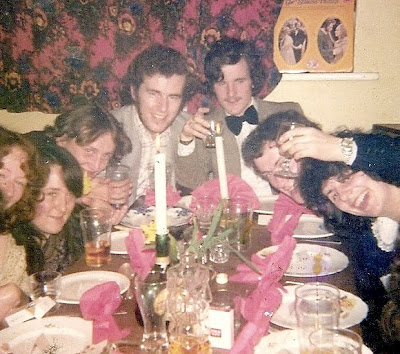 On occasions, one of these hardy wenches would, with one powerful strike of a hammer and nail, hit a mysterious silver barrel that would then bring forth a powerful golden river of delicious beer.
Later that night, after much ear-piercing renditions of earthy poetry and rebel songs, these angels would lift up the inebriated menfolk and usher them forth into the darkness of the night before ending up on the floor of the hallowed 'Aula Maxima' in UCG where the male of the species would be expected to dance to the sounds ofHorslips, Boney M, and the Donna Summer as played by illustrious DJs known as the K-Tel Kids & the Big G. 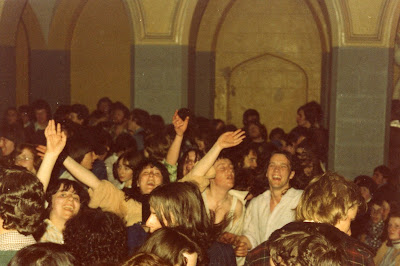 Joan- you and your friends of Maria, Marcella, Rosie & Trish brought so much laughter and goodness into my student days.
Though I have hardly ever seen you since we left UCG, my memories of you and the girls is as fresh and as loving as ever.
I will say a prayer for you tonight
Go gcoinní Dia thú go n-athaontóimid arís