The Royal Wedding of William & Kate: The Irish & Eco Associations 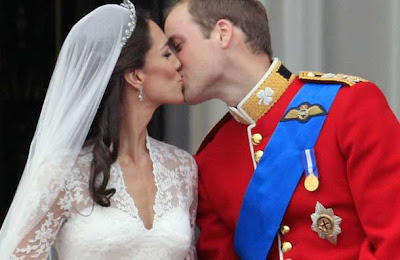 Shades of a 'Merry Old England'

As a committed republican and anti-imperialist, I have to say t

hough that I was genuinely surprised and impressed at how the ordinary English happily celebrated the wedding of Prince William and Kate Middleton. Lots of street parties, and fetes on village greens with music, old-fashioned games, champagne and cups of teas with scones. The huge crowds in London were of all ages & were so well-behaved enjoying family picnics and small group get-togethers.

The 'walkers-pace' mass movement of people to the gates of Buckingham Place was surreal, as if they were all guests in a wedding party group of days gone by chatting and laughing as they merrily followed the bride and bridegroom from the church up to the parents' house. The church service in the picturesque medieval abbey was very spiritual; the fulsome singing of hymns such as 'Jerusalem' absolutely magnificent. It was at one level a re-awakening of a sense of community and neighbourliness in England. And boy, do the English do

pageantry like no-one else can. The main parks, boulevards, historical fountains, statutes and buildings seemed to posively sparkle as if they all were given an extra cleaning and polishing. Very impressive- the whole scene was like something out of a fictional pre-WW1 'Merry Old England' novel.

The couple too seem genuinely in love, which is really nice and should be celebrated. So I sincerely wish them a long and happy life together. And to be honest, everyone in our house was watching the television coverage of the wedding at some point during the day and commenting positively, admiring Kate's dress, Harry's ruffled look etc. On some occasions one has to chill out and not be so serious, take the whole thing at an enjoyment level and not get too caught up in the politics and the unaccceptable hereditary nature of the British aristocracy.

But of interest to me also was: a) the 'Irish' elements of Kate and William's wedding, especially noticeable in this photo, that shows a large gold shamrock on his uniform, which is that of the Irish Guards, of which he is colonel.

The person that did all the beautiful floral arrangement inside Westminster Abbey was Irishman and royal florist Shane Connolly. 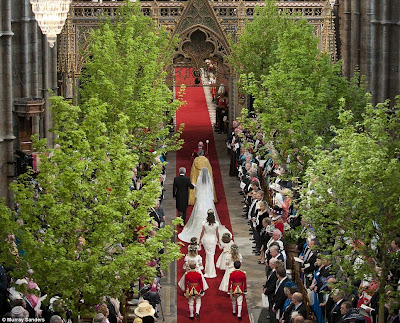 b) the spectacular sight of large trees adorning the interior of Westminster Abbey. The eco-symbolism is obvious. This is so good as trees need friends more than ever due to ever-increasing destruction of the rainforests which is significantly affecting life all across the planet. I feel William's father Charles, who is a great environmental campaigner, had some role to play in this important decision. These Maple and Hornbeam trees will be re-planted in Highgrove Park.

Actually the use of plants in wedding ceremonies was much more common in earlier times and symbolised humanity's reliance and deep respect for Nature: Laurel Wreaths on the head of the bride and groom, Flowers in the churches, Floral Bouquets, Flower girls and Ivy Garlands that covered walls and doors were for millennia features of weddings and other religious events.

So well done to Kate and William for putting Nature back onto centre stage.

c) the fact that this wedding was really an 'English' and not a 'British' affair. Very few community or street celebratory parties were held in Scotland or Northern Ireland. The 'United Kingdom' now seems like a thing of the past.