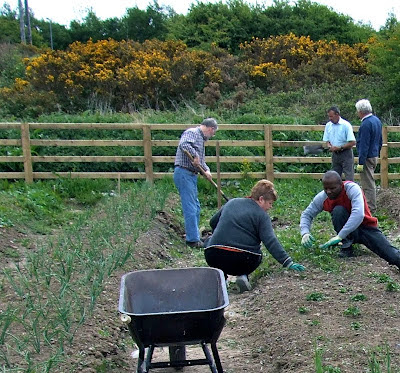 Known as 'An Ghairdín', the Ballinfoile Mór Community Organic Garden is located in the grounds of Terryland Forest Park and is as a result surrounded on two sides by hundreds of native Irish trees such as hazel and hawthorn. Oftentimes when volunteers come in on early mornings to start working in the garden, they will see wild animals such as hare, fox and pheasant retreating back into the last great refuge of the animal kingdom in Ireland, namely the forests. Whilst later in the day undertaking duties such as planting, weeding and harvesting, they are blessed to hear a chorus of birdsongs emanating from the trees.
Destruction of the Irish Forests
Until the defeat of the Irish clans and the coming of British colonists in the early 17th century, the Irish countryside was covered with great swathes of forests. The destruction of these woodlands to make way for colonial farms and to provide wood for the making of British ships, stave pipes and charcoal for iron furnaces led to the elimination of much of our larger native wild animals such as the wolf and the boar.
Celtic affinity with Nature
The Irish Celts had a tremendous affinity and respect for Nature and particularly with forests, with trees even having an honour price that had to be paid if they were cut down.
Whilst the Irish Celts did not carve large areas of farmland out of the woodlands, they did clear small areas near their settlements and on the edge of the forests for the planting of herbs, fruits and vegetables. These areas were known as 'Leana' or 'Lus Leana' , meaning 'garden' or 'herbal garden'.
So it is appropriate that the Ballinfoile Mór Community Organic Garden is bordered on one side by the forest and on the other by a modern housing estate called 'Lus Leana'!!
A total coincidence. But nevertheless so surreal and so full of serendipity!