Climate Change Action: Don't Let This Be a One Day Wonder. 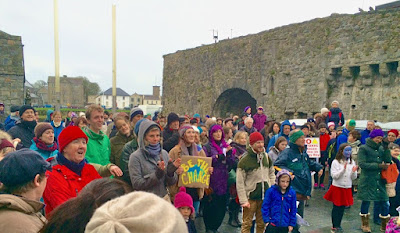 In spite of the winds and downpours, there was a very good turnout at today's Climate Action protest in Galway. It was lovely to see families, teenagers, students, grandparents, community activists, artists, eco-campaigners, teachers, feminists and progressive politicos in today's march through the city centre and subsequent rally in historic Spanish Arch.
The organisers - Transition Galway - did a great job and there were some great speeches.
Wonderful to see veteran campaigners such as Caoimhin Ó Maolallaigh, Kieran Cunnane, Liz Hackett, Seamus Diskin, Betty & Jim Gosling, Johnny Duhan, Coralie Mureau, John Cunningham, Iona & Daibhi O'Croinin are still fighting the good fight for justice.
I was honoured to be asked by Caoimhín Ó Maolallaigh to be one of the speakers at the event. 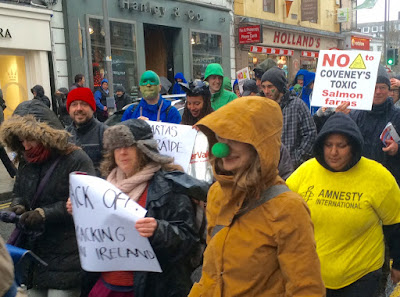 My message was that...

The planet is being increasingly exploited, desecrated and raped to satisfy the desires and greed of global/national elites who have managed to make so many of us become addicted to fossil fuels and consumerism. Thanks to man-made climate change and its associated deforestation, habitat loss, road construction, urban sprawl and commercial farming, we are witnessing a Mass Extinction not seen for millions of years.
We are been lulled into digging the graves of wildlife and for generations of humans not yet born.
Due to the power of fossil fuels corporations and the 'need' to continue to promote national consumerism, governments are failing to show leadership.
Sometimes we can feel powerless in the face of global scale of climate change. Melting glaciers, rising sea levels, acidic oceans, disappearing islands in the Pacific, threatened extinction of rhinos, tigers and elephants, climate conflicts in Asia/Africa, and deforestation in South America and Central Africa may make us feel that we are trying to hold back a tsunami with a pitchfork. Hence we can be dismissed by cynics as just grains of sand on a beach who tell us that personal greed (me-feinism) combined with the influence/wealth of the fossil fuels corporation and their poltical lackeys are too powerful to overcome.
But the answer is YES we are grains of sand on a beach. But without the grains of sand there is no beach. We need to follow the green dictum of "Think Global, Act Local" and that progressive change in society for eons has come from grassroots people power. And Galway is where we start and it is where local communities have won victories for the common good and the environment against the forces of conservatism over the last decade. Shining examples are the "No to Incineration, Yes to Recyling"; the halting of a four lane highway through Terryland Forest Park; Merlin Woods...

But concerned Galwegians like all those on the march today must stay together and stay active and make the case for Climate Change reversal a cause for everyone. Technology can help us. But the key priority is to reconnect with Nature and rediscover its sense of wonder and importance. In the case of the Terryland Forest Park, we are working with scientists, technologists, teachers and local residents to make this potentially great natural resource into a major Outdoor Classroom and Outdoor Laboratory, a Nature Play and Leisure facility for local schools, collages and the general public.
The almost 100,000 native Irish trees that people planted in this community-council-made forest since 2000 have had enormous benefits to the health of the planet. Science has shown that these 100,000 trees have absorbed 3,800 metric tons of carbon dioxide; offset the climate impact of 800 cars for one year; supply oxgyen for 400,000 people for one day; provide 4.64 billion euros worth of air pollution controls for 50 years and have enriched biodiversity by providing home to so many species of flora and fauna.
So by working together, we the ordinary people of Galway can make a positive difference globally. Yes we can!