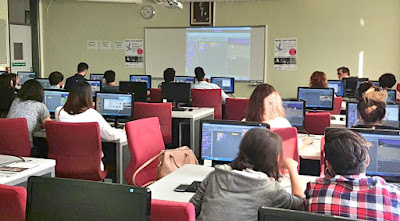 Over the last few months I have taught volunteer mentors across the Middle East, as part of the Refugee Code Week (RCW) initiative, without leaving Galway. For thanks to the power of SAP Webinar, I now give live workshops and lectures to people all over the world from my own city. As a result of this state-of-the art video conferencing software, I was actually lecturing (in a virtual sense) in Brazil during the Rio Olympics!

In spite of its misuse by so many of our fellow man, modern technology can be a wonderful force for good, bringing joy and positive benefits to the world. None more so that ‘webinars’.

Over the weekend. I provided two training workshops to the students of ISIK University in Istanbul in advance of them mentoring to Syrian refugee children living in Turkey. There are over 2.5 million Syrians in this country, victims of a war that is becoming ever more brutal.
Photograph shows students in Istanbul watching the screen which I am controlling from Galway.
I have to thank most sincerely Professor Rabia Karakaya Polat for encouraging her students to support this learn-to-code project, to Elie Laurence Karam and Frank Falvey of SAP for facilitating the webinars and to Claire Gillissen, Batoul Husseini, Ibrahim Khafagy and Bernard Kirk for setting up and maintaining RCW.
As you know, I also work 'on the ground' in countries such as Turkey and Jordan. Which is of course my favourite method of teaching!