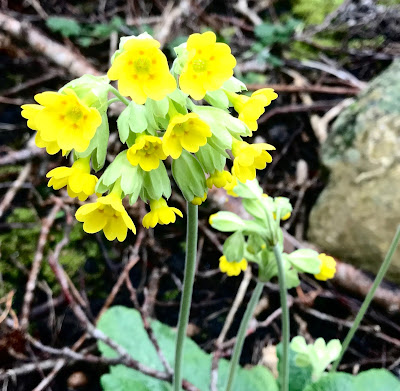 The Cowslip's Irish name tells you exactly what its association was with in rural Ireland in days gone by. "Bainne bó bleachtáin" means the "milk of the milking cow" and the flower was rubbed on a cow's udder on May Day to protect the milk.
Also known as St. Peter's Wort ('flower' in Anglo-Saxon) or St Peter's Keys, its connection with this most famous of Christian saints, who was given the keys to the kingdom of Heaven (symbolised in the official flag of the Vatican), is due to its pendulous shaped flower grouping on the plant.

The Cowslip was one of the native Irish wildflowers that was an early victim of modern intensive farming. But it is making a comeback on roadside verges and thanks to the efforts of volunteers in planting meadows. It is found across the grasslands and along the outer ring of the woodlands of Terryland Forest Park.