The Yellow Flowers of Spring: the Dandelion 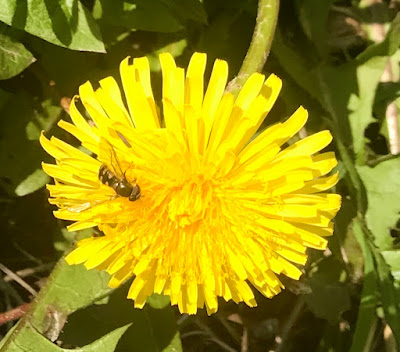 The flower is found all across the meadows and along the edges of the pathways of Terryland Forest Park.
A member of the daisy family, the dandelion has distinctive large golden flower-heads which are also clusters of tiny flowers and toothed leaves. In Ireland it was a flower that symbolised the beginning of Spring and once more associated with St. Brigit/Brigid, Ireland's first female saint (women were very powerful in the early Celtic Christian church), and with the pagan goddess of the same name.
The dandelion was recognised as a very important herbal food plant up until a few decade ago. In earlier times, the dandelion was recognised as a very important herbal and food plant. Containing vitamins A, B, C, and D, as well as minerals such as iron, potassium, and zinc, it was used as a cleansing agent for the body and for a variety of ailments including liver complaints, upset stomach, bowels, gall stones, hemorrhoids as well as for jaundice (root) and warts (sap).
The flowers can be made into dandelion wine, which has a reputation as an excellent tonic, and the dried roots, when roasted and ground, make an effective natural substitute for coffee.