An Irishman’s Journey across Africa: The Botswana Story, Part 1. 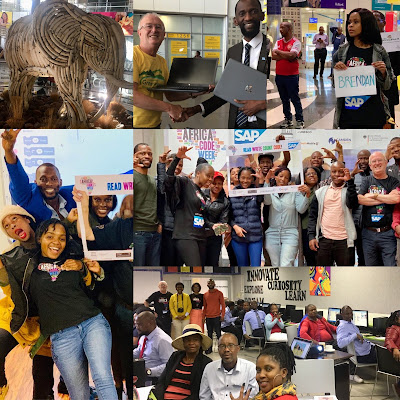 Thanks to the fantastic Africa Code Week (ACW) initiative I have, since May 2015, worked extensively across Africa, from Cairo in the north to Cape Town in the south. I have been in places and have meet peoples that have gone beyond my wildest dreams. I consider myself extremely lucky and blessed to have been granted these wonderful opportunities and have been humbled by the encounters and experiences gained.
In my latest short article on the continent that was the birthplace of our species, I throw the spotlight on a country that still vibrates with the pulse of pre-colonial Africa.
Botswana is a place like no other on Earth. With 35% of its territory designated national park and with a small population, there was until recently a strong peaceful cultural harmony between the nation and the rest of Nature. The country is ‘wild Africa at it best’ and is home to a third of the continent’s elephant population earning it the accolade of being the last refuge for this endangered and most iconic of all mammals. There is a saying that many travel to Botswana for its wildlife and stay for its people. In my case it was slightly different; I came to the country for its people (to teach coding) and wanted to remain not just for its remarkable wildlife, breathtakingly stunning primordial diverse landscapes, but also for the warm and gentle Batswana (the Tswana peoples). It is a peaceful society, has a high literary rate, a low level of corruption and a strong justice system. Unlike so many countries worldwide, there is little religious, social, racial or ethnic tensions nor the scar of urban ghettoisation.
In my bias opinion, I am the country’s No 1 fan! But I only found out since my last visit the real reason why Botswana has cast such a spell of enchantment over me. The answer will be given in my next posting on southern Africa!
But Botswana though is not an earthly paradise. Like elsewhere, it has serious economic, social and environmental problems. In a country that is comprised of circa 70% desert, drought and desertification are issues of growing concern exacerbated by Climate Change and huge increases in commercial livestock herding. It has a high incidence of HIV/AIDS particularly amongst the young (15-24 age group) who account for c50% of new cases; and it is where the so-call ‘blesser’ culture still exists in which older rich men use money and expensive gifts to entice young girls into male controlled sexual relationships. There has been controversy too over the handling of the land rights of the indigenous ‘San’ hunter-gatherers. From traditional low levels of elephant poaching, the last year has seen a significant rise.
Youth employment is very high in the country. Whilst it is large at 19% for the total population, it is 34% amongst the younger age group.
The latter is the reason why I have worked in the country on four separate occasions since 2016 and hopefully will do so again in the future. As part of the African Code Week initiative (involving 37 countries), we deliver teacher and mentor training in computer coding, supporting its introduction into primary/secondary school curricula in order to provide its young people with key digital skills for the 21st century. Over the years, this programme has been organised in partnership with local NGOs (Ngwana Enterprises, The Clicking Generation, Techno Kids Center, People-Powered Generation), the country’s mining corporation(Debswana)) and the government of Botswana. There is an enthusiastic appetite for technology and digital innovation amongst students and teachers, and science is being giving increased recognition in the educational system. Young entrepreneurs are setting up their own high tech companies to take advantage of the global web. State policy is to expand the national economic base and its ICT infrastructure in order to provide the jobs that its highly intelligent youth urgently require.
Diamonds and tourism are the country’s two primary sources of revenue. Botswana is one of world’s top diamond producers with the state owning 50% of the mining company responsible, and thankfully not having the associated violence, illegal extraction, criminality and corruption that many other mining countries have suffered from. I have worked in the closed mining town of Orapa, which was an amazing experience. Mining is now complemented by the add-on value of a diamond cutting and polishing industry based in the capital.
In the case of tourism, there is a movement towards diversification. The Okavango Delta is one of the most famed natural habitats in the world and is renowned for its high quality eco-tourism and low ecological footprint. The government wants to bring the Okavango sustainable model, that is characterised by collaboration with indigenous communities, environmental protection and sustainability, to other regions across Botswana. There are proposals to develop a cross-border bilateral approach to tourism such as linking in with Zimbabwe’s Victoria Falls. ‘Conference tourism’ in its two cities, namely Francestown and Gaberone, is a new area of development.
I have enjoyed my time working with its young ACW ambassadors. So I extend my heartfelt thanks and appreciation to Phatsimo, Mooketsi, Tebogo, Agang, Monk and Kesego for their professionalism and friendship in this most beautiful of countries. Until we meet again, I say to all of you keep safe and healthy.