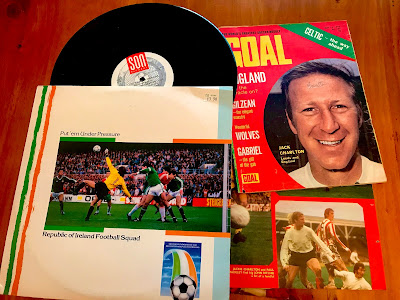 Photo shows some of the memorabilia that I still have of Big Jack, both during his time with Leeds United (my childhood collection of ‘Shoot’ and ‘Goal’ magazines) and with Ireland (a “Put ‘em Under Pressure” disc record featuring musicians such as Máire Ní Bhraonáin and  Davy Spillane, produced by Larry Mullen of U2.- best sports anthem ever!- check out https://bit.ly/2CwmQw6 ). As a kid I was a fan of Don Revie’s legendary Leeds ('Peacocks'), a team of ‘Sniffer’ Clarke, ‘Hot Shot’ Lorimer, Norman ‘Bites Your Legs’ Hunter, ‘Top Cat’ Cooper,  Johnny ‘The General’ Giles, ‘Big Jack’ Charlton... Later on,  as with the whole nation, I became a loyal follower of Jack’s boys- Packie Bonner, Ronnie Whelan, Mick McCarthy, Paul McGrath, John Aldridge, Ray Houghton…
Ireland becomes a worldwide phenomenon- thanks to an Englishman!
Jack rightly deserves demi-god status in Ireland. A down-to-earth honest-to-goodness working class Geordie lad with no airs and graces, we adopted him as one of our own as he helped reinvigorate our pride in the nation. Not surprising in one sense as Geordie/Northumberland has a strong ancient cultural and ethnic affinity with Ireland going back to the influences of St Aidan and Lindisfarne, the nearby Gaels of Strathclyde and even further into prehistory. As manager of the national soccer team, he brought not just Irish soccer onto a global stage but also helped foster a new sense of Irishness that had not been seen before. Getting Ireland into two World Cups and one Euro Cup were magnificent achievements in their own right. But it was what happened around the soccer team that left behind a benign legacy towards Ireland that still resonates today. Jack the Englishman was the unofficial commander-in-chief of a legendary ‘Green Army’ whose male and female ‘troops’, armed with nothing more than emerald football jerseys, tricolour flags and Irish rebel songs, successfully breached international borders by chartered flight, ferry boat and Volkswagen van to swiftly overcome all resistance, capturing in the process the hearts and minds of the local populations. These friendly Irish invaders, with their craic and beguiling nature, charmed the world for many years thereafter. In the 1990s, it was ‘cool’ to be Irish. In the 1960s Bealtlemania took hold. Three decades later it was an 'Irishmania' that erupted globally particularly in the field of entertainment with musicians (Sinead O’Connor, Chieftains, U2, Clannad, Cranberries, Boyzone, Corrs and Eurovision winners), actors (Liam Neeson, Pierce Brosnan, Brendan Gleeson, Colm Meaney), Irish themed films (Michael Collins, In the Name of the Father, Devil’s Own, The Field, The Committments), comedy (Father Ted, Ballykissangel, Graham Norton), and of course with the dance, rhythms and costumes of Riverdance. As a direct result of the Green Army travels, the ‘Irish pub’ phenomena took root in nearly every large city across every continent. Unlike many of the Irish bars of old that existed in Irish diaspora neighbourhoods in Britain and USA, these new hostelries were bright and attractive places, full of young Irish and non-Irish alike, happily mixing together, enjoying tasty Irish food and drink in an environment decorated with Celtic memorabilia, where the strains of both live traditional Irish and Irish rock music had the crowds dancing and singing until the small hours of the morning. Exports of Guinness, whiskeys, cream liquors and Munster butter quickly skyrocketed, having a positive impact on the home economy. Huge numbers of young people left Ireland to build, decorate, manage, serve and play music in these new establishments. I was one of those very fortunate people that was part of this new wave of Irish emigration during the early-mid 1990s. After establishing Monroes as Galway’s first seven day music venue and a popular hostelry, I spent an exciting few years managing in the pub trade overseas. Thanks to Jack, I had some great adventures, made lifelong friends and went through some strange experiences during this chapter of my life. To mention one of many- on a dark snowbound winter night in Reykjavik, I had a surreal but most enjoyable rendezvous in an Irish pub filled with very friendly Englishman swapping stories about their fellow Geordie, Jack Charlton. Nothing strange there until one realises that they were all British Army squaddies (soldiers) from the Royal Regiment of Fusiliers Regiment dressed in full desert military fatigues. What!?- hot desert military maneuverers in ice-covered Iceland!? -Strange but true! But that is another tale for another day.
Thanks Jack for the memories. You will always be Ireland’s favourite Englishman. Rest in Peace- Ar dheis Dé go raibh a anam.
Epilogue
Sadly the dream inspired by Jack soon began to turn stale as greed, arrogance, gombeen men and ‘plastic paddywackery’ reared their ugly heads. The subsequent so-called ‘Celtic Tiger’ allowed the worst excesses of Irishness to come to the fore, influenced by an Old Boys ‘me-féin’ elite of overpaid bankers, a particular corp of politicians, top sports executives, property speculators (I would never honour them with the label of ‘developers’) and their small town imitators who travelled the world flaunting their wealth, staying at the best hotels, and appearing at all the Irish soccer games. FAI lost the run of itself by appointing the billionaire Denis O’Brien (who had undermined parliamentary democracy for his own ends) as its President for Life and allowing John Delaney to indulge himself with the coffers. Irish drug gang lords with their ‘bling’ culture began to be seen and loudly heard in the Spanish holiday resorts and elsewhere frequenting and sometimes sponsoring sporting events. Too many of the hastily built global Irish pubs of the 2000s degenerated into tackiness characterised by garish shamrock/leprechaun signage, never ending ‘Happy Hour’ cheap drink promotions and foul-mouthed binge drinking Irish tourists distorting the true meaning of the rebel songs that they belted out. I am hoping that the stains of these elements from the post-Jack era are rapidly disappearing.