Easter 2021 - Out of the Ashes out of Vandalised Trees, Arose the Phoenix Saplings. 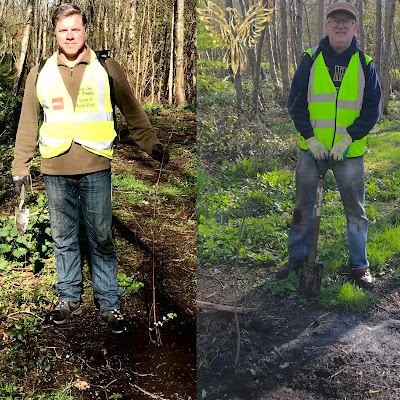 My good friend Ryan Crowell and myself today in Terryland Forest Park planted 7 trees in honour of the 7 signatories of the 'Proclamation of the Irish Republic' that was read out on Easter Sunday 1916 by Pádraig Pádraig in front of the GPO, marking the beginning of the Rising by the men and women of the Irish Volunteers and the Irish Citizen Army against the might of the British Empire. We planted the saplings amongst the ashes of the fires fueled by the wood from trees cut down by vandals in the People's Park in December/January last, trees which had been planted by volunteers of all ages on March 12th 2000.

What we did admittedly was a small symbolic gesture but one hopefully that will compensate somewhat for the damage caused by the destructive selfish anti-social mavericks of a few months ago and which will provide sanctuary to wildlife and act as a 'carbon sink' for many decades to come. This was my final planting of 2021. I will though keep a careful eye on these 7 trees as they mature and grow into the future, referring to them always as the 'Phoenix Trees'.

The 'Proclamation of the Irish Republic' is a manifesto that Irish people should be extremely proud of. It is in my opinion one of the most egalitarian revolutionary documents of the early 20th century, declaring the right of the people of Ireland to the ownership of Ireland, to religious and civil liberty, to equal rights and equal opportunities to all its citizens, both male and female, and in cherishing all the children of the nation equally. It provided hope and a clarion call for freedom to oppressed peoples everywhere in a time when the world was controlled by empires I was proud too that Ryan Crowell joined me today in this tribute as he is of the family of Seán Mac Diarmada, one of the seven signatories of the Proclamation. The other signatories were Thomas J. Clarke, Thomas MacDonagh, Pádraig Pearse, Éamonn Ceann, James Connolly and Joseph Plunkett.