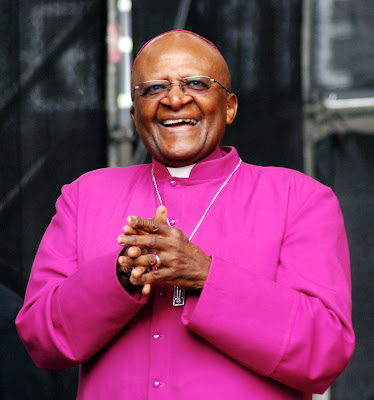 The world this week lost one of the great iconic figures of the anti-apartheid movement. Archbishop Desmond Tutu was a leader of the struggle against racist white minority rule in South Africa, and was for decades at the forefront of peaceful mass resistance against the regime. A rebellious priest he steered the Christian churches away from a lukewarm stance on apartheid towards a strong proactive opposition and a recognition that it was evil and immoral to tolerate it. When Nelson Mandela was released from prison in 1990, he spent his first night of freedom with Desmond at the bishop’s residency in Cape Town. When he died in 2013, it was Tutu that gave the final prayers at his memorial service. Mandela would refer to him as the people’s archbishop and it was Tutu who  came up with the term ‘Rainbow Nation’ to describe the ethnic mix he wished for in a post-apartheid inclusive South Africa. It was to be a country for all its peoples and a recognition that many white South Africans over many years such as Helen Suzman, Archbishop of Durban Denis Hurley (his parents were Irish), Kathleen Murray (her father was Irish) and Joe Slovo were in positions of leadership in the progressive movement for liberty, equality and fraternity. A supporter of sanctions and boycotts, Tutu in the 1980s derided western leaders such as US President Reagan, British Prime Minister Margaret Thatcher and German Chancellor Helmut Kohl for their backing of the South African government whilst also condemning the Soviet Union and China for their anti-democratic anti-religious authoritarianism.  Throughout his life he was a strong opponent of Israel, demanding an international boycott of the country, seeing its treatment of Palestinians and the military occupation and colonial settlement of their lands as ‘apartheid’. Desmond also opposed the illegal invasion of Iraq by a US/UK lead coalition, spoke out against political corruption in post-apartheid South Africa, was a strong advocate for gay rights and campaigned for tough action on Climate Change.

During my student and post student days I was involved in the global campaign against institutionalised racism in South Africa, setting up a branch of the Irish Anti-Apartheid Movement (IAAM) in UCG (now NUIG) during 1977, inviting its founder Kader Asmal to address the university’s Students’ Union assembly and being a participant in USI-led activities when student leaders from Galway such as Mike Jennings, Padraic Mannion and Grainne McMorrow were part of the movement during an era when powerful interests in Ireland tacitly viewed apartheid as a ‘necessary bastion’ against ‘godless’ communism. The IRFU arrogantly supported sporting tours from and visits to South Africa, and businesses such as Dunnes Stores sold their farm produce in their supermarkets. I demonstrated outside the Lansdowne Road stadium in the early 1980s during rugby matches alongside activists such as Michael D. Higgins, now President of Ireland; stood on the picket line at the Dunnes Stores branch on Henry Street in the mid 1980s with brave workers such as Mary Manning, sacked because they would not handle South African oranges and vegetables. These pickets were largely ignored by amongst others the wider Irish trade union membership until Bishop Desmond Tutu gave them international recognition by inviting the strikers to visit him in London during 1985 to thank them for their courageous efforts. In the 1980s I proudly wore my ‘Free Nelson Mandela’ tee-shirt dancing to the song of the same name by the Specials at alternative discos. I joined Michael D. and Sabina Higgins with other Galway anti-apartheid activists as well as Labour supporters in the Atlanta Hotel Dominick Street Galway on February 11 1990 as we emotionally watched on a big television screen Nelson Mandela being released from Victor Verster Prison after 28 years imprisonment.

Over recent years during my work visits to South Africa, I often met ANC veterans who talk admiringly of the grassroots support that they had from Ireland during the dark days. Some  would proudly inform me that they, from many different religious faiths, had been given their education by Irish clerics who regaled them with stories of the centuries-long struggle for Irish independence. Many viewed the conflicts in Northern Ireland and their own country as part of the wider global movement against imperialism, based on overcoming political establishments that used racial/class discrimination and police brutality to keep indigenous populations under control. Sinn Féin and the African National Congress (ANC) saw themselves as brothers-in-arms and Gerry Adams was part of the official guard of honour at Mandela’s funeral in 2013. Kader Asmal, Trinity law lecturer and IAAM co-founder who later become a Minister in Mandela’s government, had in the 1970s and 1980s arranged meetings between the IRA and the ANC’s military wing. But Desmond Tutu was always against armed conflict and consistently called for a peaceful settlement to the ‘Troubles’.

These ANC veterans would have agreed with Tutu though that the country still has so much to do to live up to the vision that both he and Mandela had of an egalitarian non-sexist non-racist Rainbow Nation, and that inequality, poverty, corruption, crime, femicide, xenophobia and racism were still prevalent.

During the apartheid era I, as a young impatient social activist, personally did often feel that Tutu, who was viewed internationally as the publicly acceptable tolerant face of the struggle for freedom, justice and equality in South Africa, was not radical enough and was too willing to cool the righteous anger of the oppressed masses. But in hindsight I admit that I was wrong and have over the years come to greatly admire the charming, smiling, gregarious, friendly, witty socialist churchman who was courageous beyond measure, willing to speak out against human rights abuses by the governments of Israel, USA, China, Soviet Union, UK and Myanmar.

A hero to so many over so many generations Desmond Tutu, throughout his long eventful life, saw himself first and foremost as a Christian priest rather than a politician who tried to live and to follow in the footsteps of his own hero, namely Jesus Christ. May he Rest in Peace/Ar dheis Dé go raibh a anam.