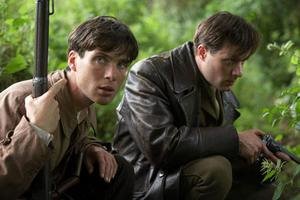 Well done to the British film producer, Ken Loach. His film - 'The Wind that Shakes the Barley' - on the subject of the 'Irish War of Independence' has being condemned viciously by the British tabloid press. Which must be a good thing!
'The Sun' and other similar newspapers tore him asunder for exposing the terror tactics of the British army against the Irish population during the War of Independence (1918-1921). But he told nothing but the truth about the British paramilitary units known as the 'Black 'n' Tans' (so called becasue they wore a mix of brown and black uniforms) who committed so many atrocities against civilians- torture, burnings, drunken rampages, murders.... that, as with Cromwell's armies of the mid-17th century, they will live forever as demons in the folklore of Ireland. But for the British establishment today it is embarrassing that people will make the obvious comparision to the tactics of the US & UK occupation military forces in present day Iraq.
Ken is representative of an honourary tradition amongst a section of British society who always had the courage to speak the truth about Ireland and other issues of worldwide human rights and suffered much personal abuse and vilification as a result. People such as Gareth Pierce, Tony Benn, Ken Livingstone and Chris Mullins spring to mind.

Irish, Iraqis and Americans 'out on the town' together!
I am going to see the film tomorrow night in the company of my wife Cepta and some friends who happen to be Iraqis and American anti-war activists. They requested me to go with them because of my political views as well as my family's involvement as IRA volunteers in this war of liberation of 1918-'21. But my family were typical of this period-so I hold no special knowledge except that I listened too many a fireside chat when I was a little boy as these old veterans told their stories.
Anyway, our pub conversation after the movie should be priceless!
So I will give you my views on the movie in my next posting