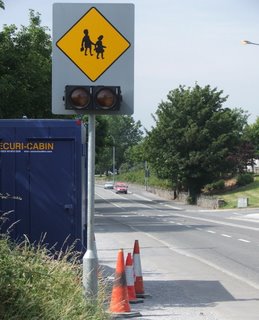 At last! – my neighbourhood can this week rejoice as City Hall contractors began work yesterday on installing a permanent pedestrian crossing and associated traffic-calming devices on the Headford Road opposite Tirellan school. One of the busiest city roadways has for too many years denied safe access to pedestrians and turned the once simple pleasure of walking to the local shop or to school into a death defying exercise! 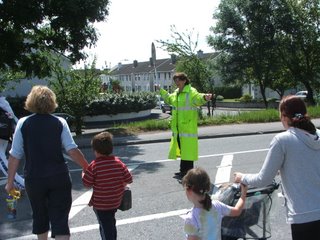 A Lollipop Lady is on hand at certain times during weekdays to help children cross to and from the school. But that is only for a few hours per day during school term.
So I am frustrated that it has taken so long to reach the construction stage.
I have been leading a residents’ campaign for such a pedestrian facility since 2002. In 2003, we persuaded the roads section of Galway City Council to officially recommend its installation. In 2004 funds were allocated for its construction. However two school years have passed since then. Thankfully though no serious road accident occurred involving pupils walking to this school.
In recent discussions with City Hall, we were also promised that a permanent pedestrian crossing is also now being considered for Bothar na Traobh near the Kirwan Roundabout. But that may take years to materialise (if ever)?
Yet our aims goes much deeper that just securing a once-off crossing. We want the installation of permanent pedestrian crossings on all roads leading onto all city roundabouts in order to facilitate uninterrupted pedestrian flow.

Council’s Roadside Failure
So we are alarmed that this City Council, now in its third year in office, has made no progress whatsoever in this area. For remember, this was the council comprising young new faces with fresh ideas, many from new political parties that promised so much when it was elected in June 2004. It was to herald a new dawn for the people of Galway.
Alas, the councillors' election promises on many critical issues such as transport have still to be delivered. One of the basic tenets of the Galway City Development Board Strategy (which I helped produce) adopted in 2002 is that the city will become ‘pedestrian-friendly, cycling-friendly, disability-friendly and child-friendly’.
The councillors collectively should be ashamed of themselves that they have failed to face up to the ‘roundabouts’ issue and have failed to put in place the basic city-wide infrastructure required to facilitate pedestrian and cyclist flow in Galway’s suburbs. The traffic nightmare that they all promised to prioritise has got progressively worse since they took up office. It is now too dangerous for most residents to contemplate alternatives to car transport even for short journeys to shops, schools or places of worship. This has led to the almost complete extinction of bicycles from the school grounds whereas just over twenty years ago, 30% of pupils cycled.