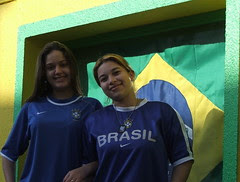 Through personal contacts, I have developed good friendships with many of the Brazilians who now constitute 33% of the town's population and who have injected a real 'tropical buzz' into Gort.
The Brazilian invasion began over 5 years ago when Duffys, the owners of the local meat processing & animal slaughter factory were forced to travel to Brazil to recruit workers. They were finding it increasingly difficult to secure local staff for this physically demanding and dirty work.
The new arrivals came from poor communities in central and southern Brazil. As the months and years rolled by, the families of the male workers followed with the result that they have now transformed the social and cultural landscape of a Gaelic countryside. Signs in some of the local shops are now in Portuguese and the local Catholic Church hosts has a monthly mass in the language. I went to one religious service last Tuesday- it was so musical, expressive and interactive that I find myself spiritually uplifted.
This year the newcomers held their second annual 'Rio carnival' which was an outstanding success. The Brazilian women spend lots of time knitting and sewing up sparkling dress wear for the parade's participants.
Recently, the south Americans opened two shops (Real Brasil & Tabor Brasil) on the main street selling food and other domestic produce.

It must be so completely diferent to what the Irish are used to!

just wondering if there is a cd available on brazil boys in gort?

Speedie, is the Rio carnival/Gort festival running this year(2009)? Have several samba dancing friends who would love to go. Completely new to this blog thing so will just leave my email. I enjoyed reading your page. Thanks, Jill (jillodon@hotmail.com)