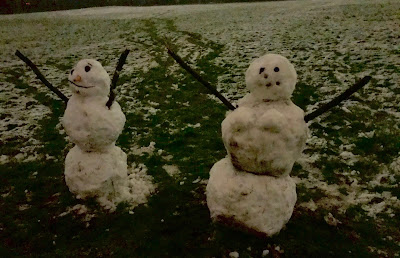 A species that was believed to be extinct from Ireland, one of the first to fall victim to Climate Change, was discovered by two people out walking tonight in Terryland Forest Park.
Even more exciting was the fact that it was a breeding pair!
The species popularly referred to by its masculine name of 'Snowman' (Irish = 'Fear Sneachta' and its science name of 'Vir Nivis') was once common across the country during the winter months. Like certain species of birds such as the Barnacle Geese, the Whooper Swan, the Jack Snipe and the much rarer Bewick Swan, the Snowman or Snow People use to migrate annually from the different parts of the northern climes of Europe, Iceland, Greenland and Canada to spend winters in Ireland.
Snowmen used to be mostly found during the December to January period living in parks and home gardens. It was thought that this was due to people especially children feeding them with domestic foodstuffs and almost adopting them as outdoor pets. They had a particular fondness for carrots and apples. In fact the male of the species discovered tonight in Terryland actually had a carrot (see photo).
Reports are also coming in tonight of other Snow People been sighted all across the country. Scientists feel that they re-appeared in Ireland this evening for the first time in many years carried in by the unusually strong cold winds blowing in from Scandinavia. Which is interesting as in Irish folklore tales these snow people are often associated with mythological creatures from Lapland known as 'elves' whose great leader was portrayed as friendly and generous in spirit who, dressed in red and white, used to travel across the night skies in a sleigh pulled by reindeers. Or so the legend goes.
Unfortunately warming temperatures due to rising carbon levels in the atmosphere resulting from the burning of fossil fuels and deforestation made the climate of Ireland unsuitable to these gentle snow people. Their numbers started to dramatically decline from the 1980s onwards. Within a decade there were quite rare only seen in very small numbers. It was noticed by then that their bodies had become quite emaciated and they only spent a few days living in Ireland. The last sighting in the country was during a very short period in early 2018.
No comments:

The Destroyers have Returned but there is now Hope for a Brighter Future for our Parks. 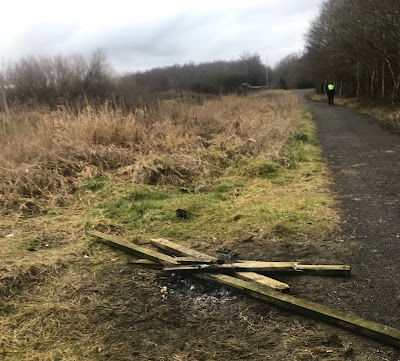 Sadly the destroyers of public property that caused so much damage to Terryland Forest Park returned yesterday to the same spot. Once again a group of 7-8 individuals ripped up parts of the perimeter fencing and used it as fuel for a large fire that they gathered around whilst they drank away, littering the place with alcohol cans and other materials in the process. Once again a concerned citizen contacted me and once again I had to go to the park encouraging the quite substantial numbers of visitors (which was lovely to witness) to avoid the specific path where the anti-people group where drinking.
But the response of the council parks staff was magnificent. These workers, though very few in number, are excellent public servants who go over and above the call of duty to safeguard our green heritage. Upon telling them of the anti-social activity and vandalism taking place, they immediately contacted An Garda Síochána. The latter were there quite quickly. However the culprits left minutes before the police arrived probably noticing the arrival of people in yellow vests. Two weeks ago, another group of drinkers in the second bad location for anti-social drinking in the park (99% of the park area is safe) were seen by a council staff member who rang the Garda. They arrived very soon after the call and issued a notice to the anti-social individuals, telling them to leave immediately and that if they returned they would be issued with on-the-spot fines.
It is good that there is now a working relationship being developed between the council parks personnel, An Garda, community volunteers, and social services (the latter when required). It is hoped that this will be formalised within the next few weeks.
However once again the destroyers caused hundreds of euros of damage to a public facility, once again leaving others to clean up their mess, and once again walking away without consequence.
At the very least they should be prosecuted and serve 'barring orders' from the public parks that they have vandalised.
Tranquil biodiversity-rich parks have shown their importance to human physical and mental health as well as planetary health during the COVID pandemic. The evidence is there for all to see. In the case of Terryland Forest Park, it has for twenty one years acted as a unique urban wildlife sanctuary, a major 'carbon sink' with its c100,000 trees and has more than earned its official title of being the ‘Lungs of the City. But we as citizens need to do more to protect it and other city parks. Galway City Council must now provide sufficient financial and human resources necessary to make our green zones safe and enjoyable for both humans and wildlife.
As I and others have stated so many times before, Galway city desperately needs full time parks rangers and maintenance/repair personnel as is the case with even the small suburban parks in Dublin City.
So I would encourage all city councillors to support the motion of Councillor
Imelda Byrne
that is on the agenda of next Monday’s council meeting. It calls for the council to agree on the need for full time on-the-grounds wardens seven days a week in the main city parks to ensure that they are safe and of high maintenance for the benefit of the public and of biodiversity, and this commitment will be part of the council’s contribution towards achieving the vision of Galway as a National Park City.
Well done Imelda for proposing this motion and thank you so much for your enthusiastic public support and active stance for city parks in response to the serious escalation in vandalism that occurred after Christmas in Terryland Forest Park.
My message to all councillors is to please rally behind Imelda. If passed, this motion could be a game-changer for our city.
Finally a big thank you to Ryan Crowell and others who, fully cognisant of COVID restrictions, have been so active looking after the park over the last few months. Hopefully they will be the core of a new unit of volunteer rangers in Terryland post-COVID if the council officials back this proposal.
p.s. The destroyers were briefly back this afternoon starting another fire in the exact same location using wooden fencing as fuel. Council staff and Garda were onsite very quickly.
No comments: