The Non-Irish Origins of St. Patrick's Day & 'All Things Irish'! St. Patrick himself is looked on as the personification of all that is Irish.
Yet he and so much of the traditions associated with the Festival have their origins far beyond our green shamrock shores.

So for instance:
1. St. Patrick- British & Roman!
St. Patrick himself was actually Romano-British, the son of a Roman official that was taken as a slave by Irish sea raiders probably from near Carlisle (at Hadrian’s Wall) in northern Britain in the early 5th century. Even his adopted name is not Gaelic, coming from the Latin term ‘Patricius' (noble).
Yet, as we say in Ireland, the invader/foreigner oftentimes becomes 'more Irish than the Irish themselves' (except for a few Northern Unionists!). Though sent as a prisoner to Ireland & forced to work as a slave looking after sheep in the mountains, Patrick decided to return to Ireland as a Christian missionary years after his escape. Guinness- Invented by Londoners & with some later support from the British Army!
'Guinness' was copied by Arthur Guinness from an 18th century London drink made out of roasted barley. The beer was known as ‘porter’ because it was originally popular with the porters (carriers) in Covent Garden. Arthur Guinness switched from producing the more common ale at his Dublin brewery. However Guinness was initially not well received with Dubliners because of the owner’s support for the British colonial regime and his opposition to the republican United Irishman during the rebellions of the late 1790s.
Guinness’ international reputation had also a lot to do with the British Army! In WW1, the high-energy consumption ‘porter’ breweries in mainland Britain were closed down by the government to concentrate the national energy resources on the armament production factories. However Guinness and the porter breweries in Ireland were allowed to stay open thus giving them a virtual trade monopoly in the then British Empire that stretched across five continents. The 'Irish pub' was actually created by Viking invaders in the 9th century in their new slave-trading settlements of Dublin, Cork, Limerick etc. Common to all these Viking cities was the presence of a 'tavern' where Vikings, after grueling days or months spent fighting, raiding, pillaging or trading could come to enjoy the delights of beer, music and food served by gorgeous-looking Celtic wenches.
Over a thousand years later (in 1996), I returned the favour to our Viking brethren by managing the first Irish pub in Iceland- ‘The Dubliner’ in Reykjavik! (pubs were only legalized in that country in 1989) 'St. Patrick's Day Festival Parade’ -an American invention!
It originated in the mid-18th century American cities of Boston and New York where it was created by Irish Americans longing for their homeland and an opportunity to promote their heritage. The first parade took place in New York on March 17th in 1762 when it was led by Irish soldiers serving in the British Army! By the 19th century, it had became a powerful expression of Irish nationalism and the struggle against British colonial rule in Ireland. 5. Irish Whiskey -the essence of the Middle East!
The process of creating whiskey(from the Gaelic 'uisce beatha' = 'water of life') - 'distillation' was learnt from Coptic or Arab alchemists by studious Celtic monks. The former used it for medicinal purposes. However, we Irish soon saw its greater significance in the hospitality and entertainment sectors! 6. Sexy Irish Traditional Dancing- another American invention!
Traditional Irish step dancing only gained an international appeal in the 1990s thanks primarily to the efforts of an American, Michael Flatley.
This Irish-American from Chicago created the choreography for the 'Riverdance' show and, with fellow lead dancer Jean Butler, led the show to amazing success as the intermission act in the Eurovision Song Contest in 1994. Irish step dancing has never looked back since and Riverdance has generated a myriad of successful offshoots. Not only that, but the dour unsmiling
Irish dancers of previous eras were transformed into vivacious high-kicking Irish cailíní and buachaillí in figure-hugging attire. Furthermore, modern Irish dance now unashamedly embraces elements from other cultures (Russia, Arabian) increasing its international appeal even further.
Michael Flatley portrayed all that was good and important about Irish-Americans. When Irish traditions were dying out in the Emerald Isle, it was they that for centuries nurtured and kept alive the flame of Celtic culture. There is no such thing as Irish 'Craic'!
'Craic' is looked on today as an Irish word denoting a quintessentially Irish form of fun (drink, music, amusing & friendly conversation).
In fact there was no such word in the Gaelic Language until the 1970s. It is actually an old English(!) word spelt 'crack' that meant in Elizabethan times 'to boast', 'to banter' or 'to tell a joke' as in the term 'to crack a joke'.

8. 'Irish Coffee'- invented for the benefit of American tourists suffering from the Irish weather!
On one cold evening in 1942 at a small windswept airport terminal on the west coast

of Ireland, the local chef felt pity for the tired and freezing passengers who had just embarked from a seaplane that had to turn back from its trans Atlantic journey due to atrocious weather conditions.
Being Americans, he knew that they would enjoy a cup of hot coffee (not then much consumed by Irish people) topped with fresh cream. But because of the freezing conditions, he decided to spice it up with a shot of Irish whiskey. Legend has it that one of the passengers, remarking on the unusual taste of this drink asked, "Hey Buddy, is this Brazilian coffee?", to which the chef Joe Sheridan replied, 'No, that's Irish coffee'. And so, history was made! 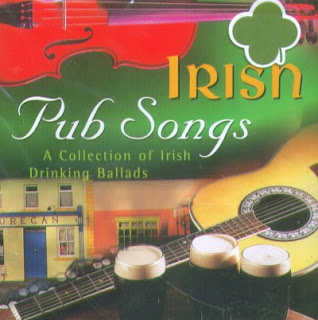 Many of those great 'traditional Irish' ballad songs that are sung with such gusto every night by broken-hearted inebriated Galwegians or Dubliners in some Irish pub across the world were in fact written by English, Scotch, Australian or American!
(Click on song title below to hear the song)
For instance Dirty Old Town (that many mistakenly believe refers to Dublin) was written by the (Scottish-) English socialist folk singer Ewan MacColl; From Clare to Here by English singer songwriter Ralph McTell; Willie McBride/Green Fields of France by Scottish Australian Eric Bogle; Danny Boy by English lawyer Fred Weatherly; My Wild Irish Rose and When Irish Eyes are Smiling by New York Broadway star Chauncey Olcott; and the late great Johnny Cash wrote Forty Shades of Green It was a London-based Punk group of mixed English & Irish background that shook Irish music to its foundations and re-invented it for a modern Western youth audience. The anti-establishment Pogues, led by their brilliant lead singer and lyricist Shane MacGowan, that revitalised Irish music and brought vibrancy, youthfulness, relevancy and radical politics back into a staid Irish music scene.
Formed in 1982, the inventors of Celtic Punk fused traditional Irish folk with contemporary English punk and rock.
The name 'Pogues' comes from Pogue Mahone, the anglicisation of the Irish 'póg mo thóin,' meaning "kiss my ass".
As with Riverdance, their music was oftentimes condemned by the native Irish purists who preferred to keep Celtic culture in a sealed box untainted by outside forces.
Silly people! Like all cultures, Irish traditions are ever-changing, are constantly borrowing and being re-shaped by external influences.

A traditional Irish (honest!) Toast
In honour of the day itself, may I send you all an old and heartfelt Irish blessing:
"May your glass be ever full,
May the roof over your head be always strong,
And may you be in heaven
half an hour before the devil knows you're dead!"
23 comments: that Israel's brutal racist militaristic actions and policies were deliberately converting Palestine into a series of walled-off over-crowded poverty stricken Ghettos that were reminiscent of the Jewish ghettos of Nazi-occupied Europe.
It is a courage that Western and other political world leaders lack.
The bishops were on a visit to Israel and the Palestinian territories.
Bishop Hanke of Eichstatt was quoted in the Irish Times as stating that, "This morning we saw pictures of the Warsaw ghetto at Yad Vashem (Holocaust Museum in Jerusalem) and this evening we are going to the Ramallah ghetto"
Cardinal Meisner of Cologne said, in referring to the heavy Israeli military presence, their checkpoints and their 26ft security wall being built through Arab lands, that it was "something done to animals not people".
Bishop Mixa of Augsburg pointed out that Israeli policies towards Palestinians bordered on racism.

It is despicable that the world's nations allow Israel to continue with this barbarism.
Today, film evidence was broadcast on BBC television showing that Israeli troops continue to use children and young people as human shields as they rampage through Palestinian homes and streets.

See my previous article on Israeli aggression entitled 'Time for the Israeli Myth to be Shattered'
41 comments: The great Gaels of Ireland
Are the men that God made mad
For all their wars are merry,
And all their songs are sad
-G.K, Chesterton, famous English writer
1 comment: