Reform in the British Political System Should be Repeated in Ireland

The recent revelations about British MPs’ expense claims is both scandalous and heartening. Scandalous because it revealed the arrogant misuse of public funds by politicians to ostentatiously upgrade their private properties. Expenditures that included cleaning a castle moat, constructing a duck house in a garden lake and repairing water pipes under a tennis court were carried out, according to claimants, so that they could better serve their constituents! 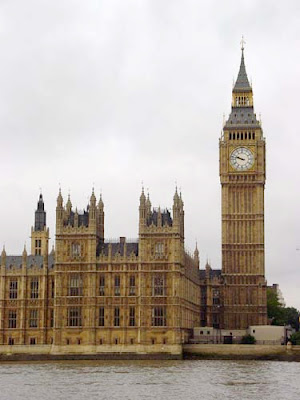 These instances had been proceeded by media stories of ‘right honourable’ Labour members of House of Lords charging tens of thousands of pounds for submitting questions.
But the whole saga was heartening too because it represented a triumph of true investigative journalism. The British newspaper–led campaign into political greed shook Westminster to its foundations due to the resultant public outcry leading to ministerial suspensions, resignations from high political office and the first steps in the reform of parliament. It is worth noting that MPs had previously tried to scupper attempts to open up their income to scrutiny by the public i.e. those to whom they are suppose to serve. Now we know why!
The old adage that ‘power corrupts, and absolute power corrupts absolutely’ has sadly proven all too true in the case of British parliamentarians of all political persuasions. 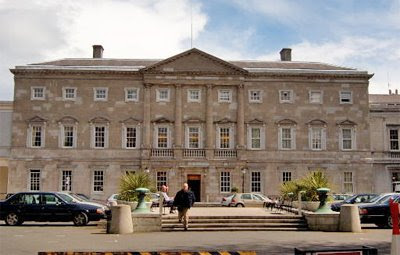 On face value it looks likely that Irish national representatives are more morally upstanding than their British counterparts due to the fact that similar stories have not and are unlikely to surface here.
But could this be because Irish TDs do not have to submit receipts for their claims? While it is true that the vast majority of politicians and government ministers that I personally know seem to be honest, hard-working often idealistic civic-minded people who use their expenses to pay for legitimate costs related to staffing and renting local constituency offices, nevertheless it is unacceptable that in a democratic country such an unmonitored financial system operates. It defies logic that these unsubstantiated annual claims can exceed over 80,000Euro annually for some national politicians. Irish parliamentarians are amongst the highest paid in the world via a combination of wages, undocumented expenses, a Dáil Éireann daily attendance fee, an annual financial bonus given to those who serve 10 years or more and an additional income of up to 20,023Euro for those chairing/co-chairing Oireachtas committees .
It was only last month that as a result of public pressure 31 current TDs from 4 political parties, who are former ministers, stopped receiving annual pensions which varied in size from 6,100 to 110,000Euro. Now they are only allowed to receive these payments (on top of their TD pensions) when they retire from politics.
Furthermore it was recently too that some TDs that were listed as teachers but who may not have had taught for decades finally gave up their sizable teaching pension rights. Yet even still, two present Ministers refuse to surrender these entitlements.
The proceedings of tribunals such as the Flood Tribunal and the jailing of Frank Dunlop provides ample evidence that certain prominent politicians, builders, landowners and developers worked together to corrupt the democratic process in this country.
Their greedy antics in cahoots with the other group in this ‘old boys network’, namely influential bankers, may have made them rich but brought the country to the brink of financial ruin. Little thought was given to long-term sustainable economic development shown by the fact that , during the Celtic Tiger epoch, only 4% of bank loans were provided towards the manufacturing sector while circa 80% were provided towards property transactions.
Even now, the government has failed to reveal the names of the infamous and immoral ‘Golden Circle of 10’ business people from the nationalised (i.e. citizens) Anglo Irish Bank. 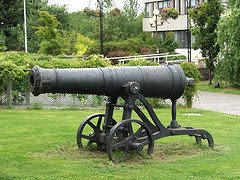 Halla na Cathrach, Gaillimh (City Hall, Galway)
At local government level the abuse of expenses also occurs according to serving councillors. Trips overseas undertaken as part of their council remit should be listed online with a report detailing the work undertaken. Nine of our MEPs recently refused to give details of their very sizable expenses for 2008 when questioned to do so by the Irish media.
In a period of severe austerity with unemployment at record levels, such a situation cannot be allowed to continue. TDs of all political parties should now have the moral courage to come together to make strenuous efforts to implement political reform in order to regain the trust of the people and rekindle respect for the democratic institutions that our forefathers fought so hard to establish. These measures could include the regular provision of detailed documentation of their state incomes that should be overseen by an independent community-based overseers board; abolishing political quangos and agencies that duplicate the work of government departments; ensuring that promotion and bonuses for public service management is based on merit and performance; ending the over-reliance on expenses by councillors for financial remuneration with a corresponding implementation of a proper salaried wage structure; undertaking the long promised reform of local government where our political representatives have little power of note except in the area of zoning and planning which so many have abused by caving into vested interests and forgetting the national interest. It is time too to consider the abolition of the Seanad which seems to serve little purpose in modern Ireland except primarily as a home for failed or aspiring TDs as well as a reward for political kudos.
No comments: 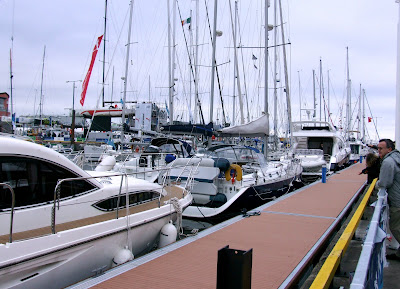 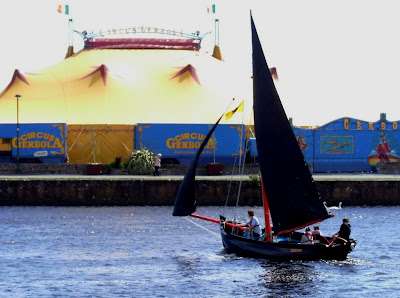 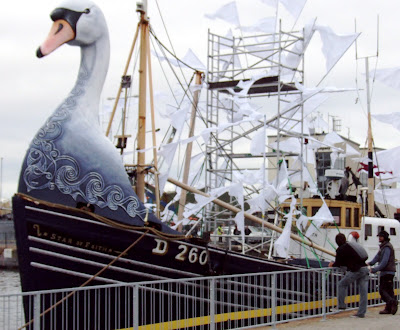 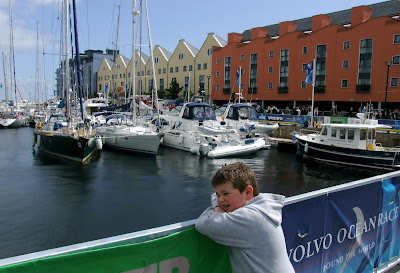 But sadly two things associated with the Boat Race Festival have left a bad taste in some of our mouths. First there was the even worse traffic jams than usual over the last few weeks. Galway City Council is overdependent on private cars as the primary mode of transport. It has failed to implement policies adopted in early 2002 designed to establish an integrated transport system by developing a walking, cycling and public transport infrastructure.
Secondly, the participation of the RAF Red Arrows in the event re-awakened old animosities from 2 years ago between the Salthill Air Show and supporters of the Galway Alliance Against War(GAAW) who publicly campaigned against the Iraqi War.
Why the organisers invited this RAF showpiece defies explanation. While I have participated in many events associated with the Volvo Boat Ace, I will also be involved in the GAAW protest this weekend against the Red Arrows
2 comments: 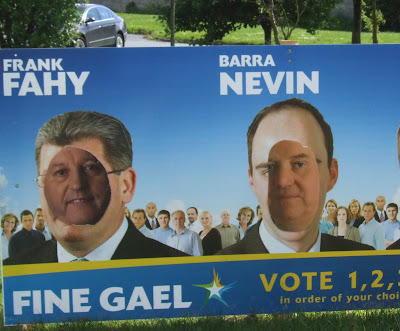 Another piece of creative ingenuity carried out on a political poster from the current elections to Galway City Council
No comments: 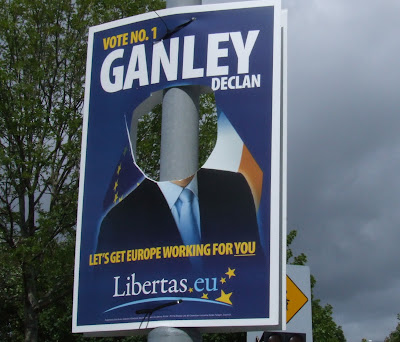 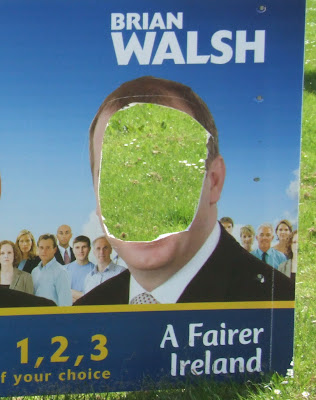